More than 370,000 homes in England are in areas with a 0.5% or greater annual risk from coastal flooding. An estimated 9,000 properties are meanwhile at risk from erosion. And on current predictions, homes affected by flooding will triple and those vulnerable to erosion will increase tenfold by 2080.

However, the recent sequence of storm events shows that climate change is accelerating. Consequently, agencies involved with external coastal programmes, such as the Environment Agency, are considering how to gather richer data at a faster rate to inform critical decision-making.

The National Network of Regional Coastal Monitoring Programmes currently uses methods including walked GNSS pole surveys with transects at intervals of around 200m along the shore. The programmes also use crewed, aerial, light detection and ranging (LiDAR) surveys, and crewed sea vessels for bathymetry. Since the early 1990s, these surveys have been carried out at frequencies between every six months and every two years.

To showcase the benefit of technologies and workflow in addition to these current methods for monitoring and assessment, SurveyAR carried out a coastal survey with the Environment Agency's Anglian Coastal Monitoring Programme (ACMP) and Connected Places Catapult as part of the Drone Pathfinder Catalyst Programme. 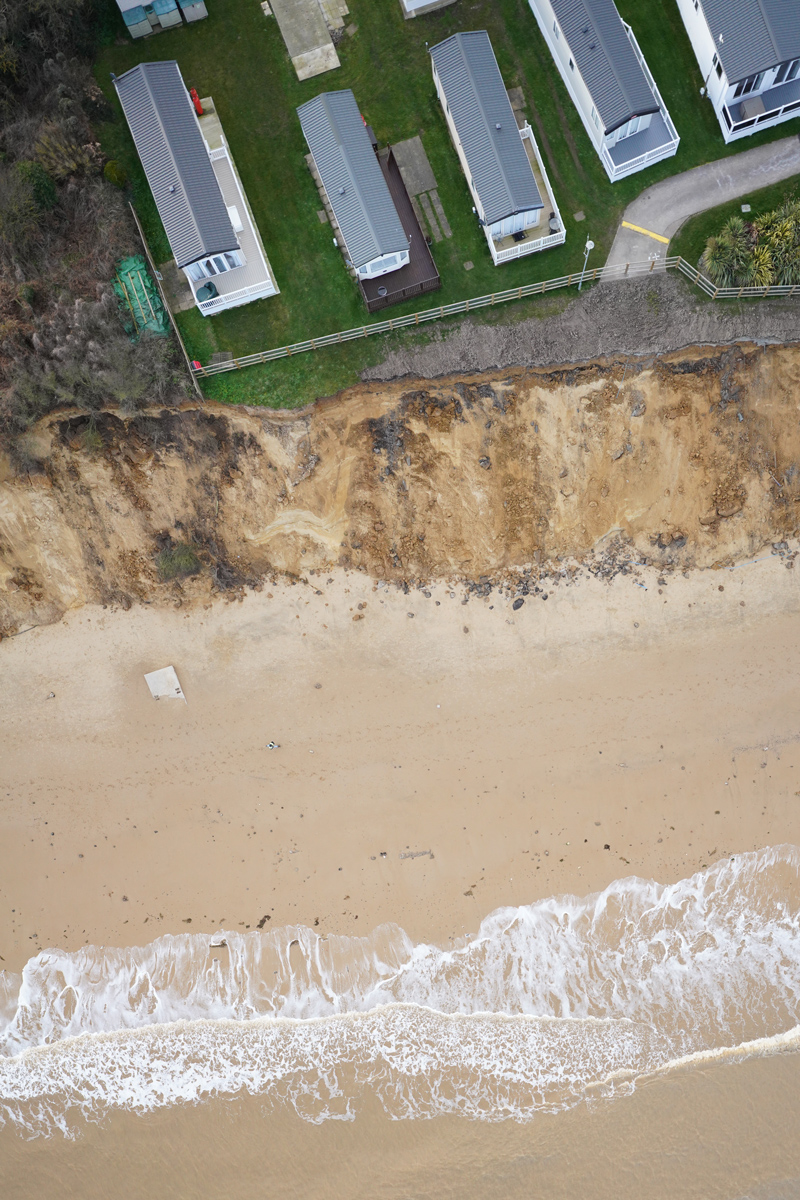 High cliffs showing slumping off the cliff down to the beach. All images © SurveyAR Ltd

Between 25 November 2021 and 30 January 2022, the UK was hit by seven named storms of varying severity. Over this time we carried out seven drone surveys using photogrammetry, LiDAR and multispectral sensing techniques, generating more than 150GB of raw survey data. These surveys, which were carried out at the end of November, beginning of December and the end of January 2022, collected data between Storm Arwen and Storm Barra.

Surveying coastal environments such as these presents various challenges that can impact the accuracy of the data, including the need to deal with homogeneous conditions, recreational users in public places, cliff faces and fast tides. Winter brings additional challenges, such as low light and harsher weather.

SurveyAR used a number of rotary drone platforms to test the accuracy and reliability of different methods, such as photogrammetry, LiDAR and multispectral imaging, the latter including blue, green, red (within the human visual range) red-edge and near infra-red (beyond human visual range). Red-edge and near infra-red are particularly useful for determining the health of vegetation. We selected sections of the coast that are affected by coastal erosion and deposition for survey.

Multiple surveyed ground control points were used to enhance and assess the positional accuracy of the survey. After this, data was processed to generate useful information, the basic outcomes including digital elevation models (DEMs) and automating cross-sections.

Figure 1 shows the impact from storm Arwen and Barra. With DEM resolution at 3.3cm/pixel there was 6-10m of erosion between November 2021 and January 2022. 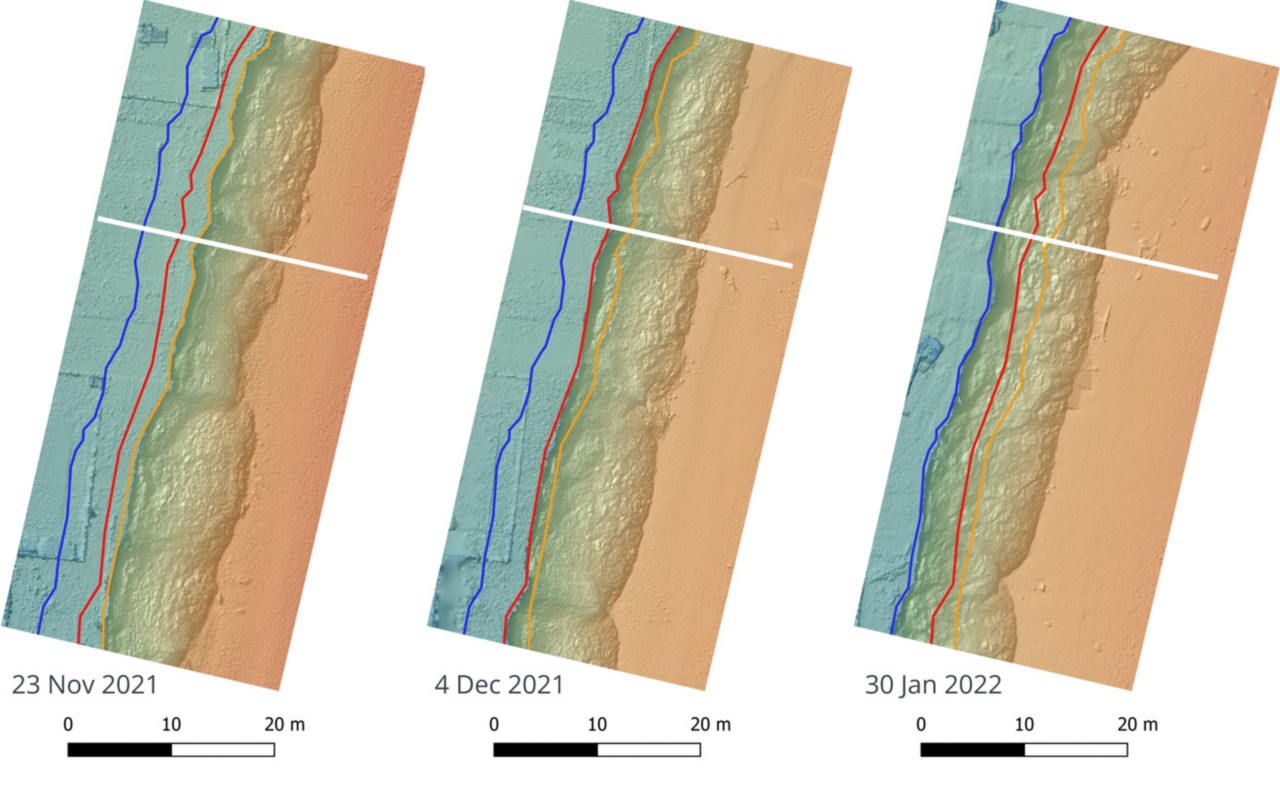 The surveys can also be used to show temporal variations in geomorphological change. For example, sediment can be mobilised and transported to create depositional features such as nesses, as shown in Figures 2 and 3.

Figure 2: Cross-section shows changes in erosion in November, December and January compared with crewed aircraft LiDAR in November (in green)

In the future, understanding the overall coastal system may improve decision-making processes for local authorities in respect to coastal interventions, such as early warning or for coastal protection including nature-based solutions.

Photogrammetry and LiDAR can be used to monitor topographic change and understand the sediment budget (volume of erosion versus deposition). In this case study, the data illustrated the impact of the storms on the beach and cliff topography. This increased evidence for and understanding of coastal change is essential in understanding the overall dynamics of coastal systems.

The images below show surveys in December  and January of the deposition zone showing growth on the right shoulder due to sediment change. 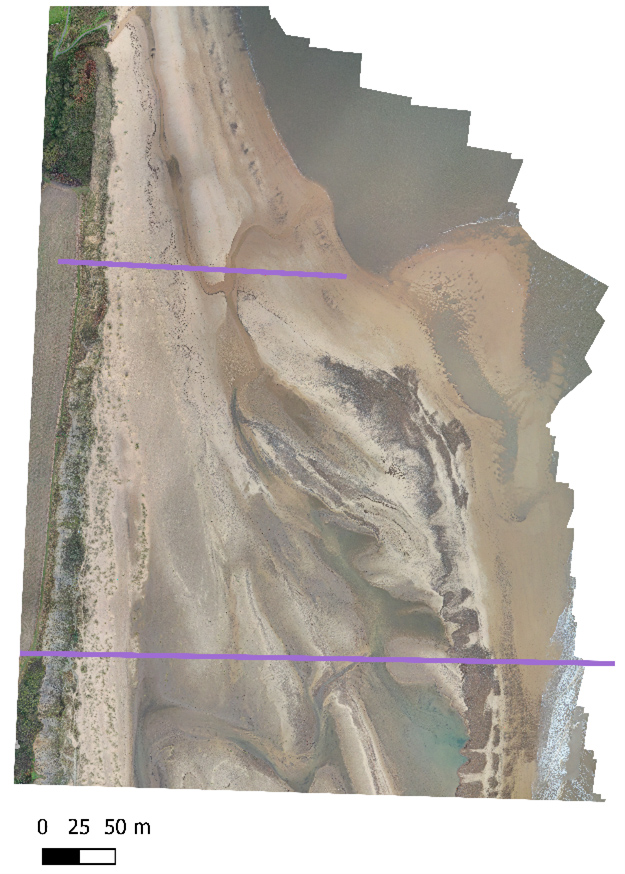 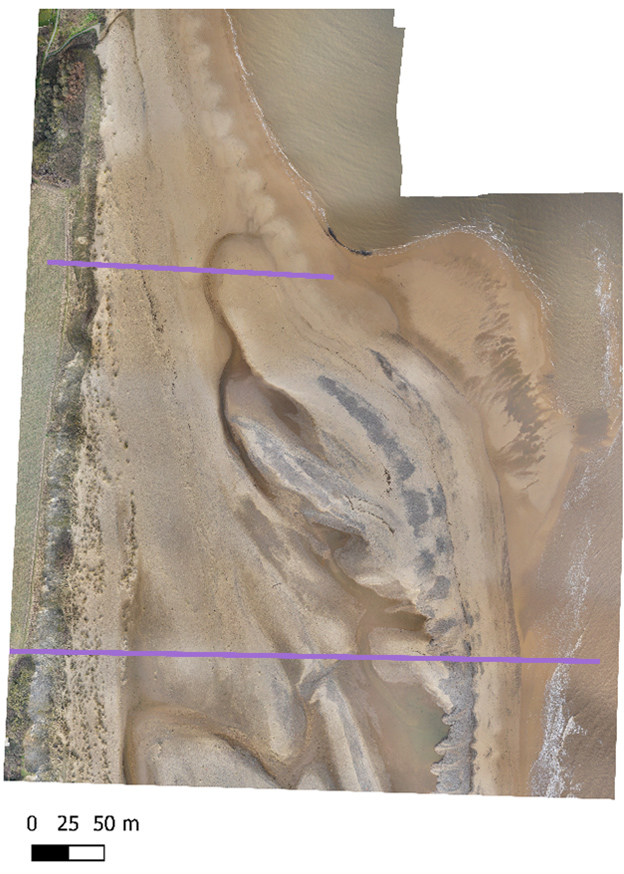 ACMP project manager for the Environment Agency Rebecca Stanley emphasises how the survey method and data products from drone surveys could add value to the monitoring programme. The high-resolution photogrammetry data provides both imagery and topographic information; that is, about surface elevation. This enables accurate delineation of the clifftop position to help analyse how far it has receded. Repeat, spatially continuous datasets comprehensively quantify loss and gain of littoral material.

Although these benefits are not exclusive to drone surveys, the greater flexibility of deployment compared with crewed aircraft surveys as well as efficiencies in data processing can together enable targeted, repeatable monitoring on rapidly changing coastal frontages in response to more intense meteorological and oceanic conditions. 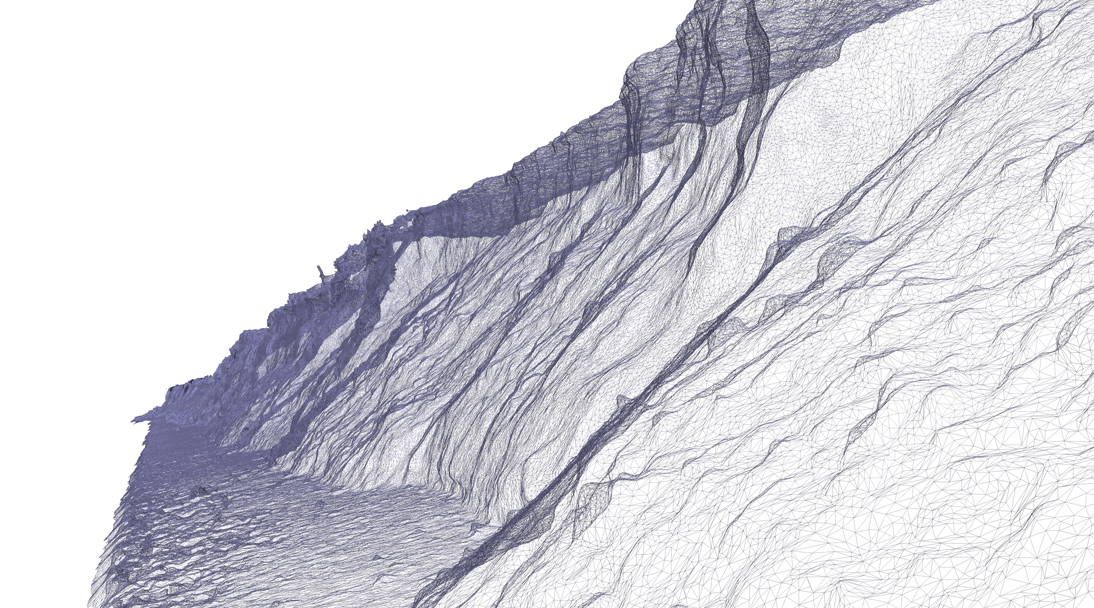 As confidence in the quality and accuracy of data from drone-based monitoring techniques increases, we anticipate that use of the technology will also increase. From this case study and other testing, we have found drones to be of greatest value on coastal frontages with mixed conditions including cliffs susceptible to slumping.

Connected Places Catapult future aviation systems engineer David Pounder says: 'It's fantastic to see how drones can support such an important type of environmental analysis. The data outputs are rich and intuitive, and I'm sure they will be of great use to the Environment Agency.

'It's key to remember that the value is not just about flying the drone itself – it's about choosing the right tool for the job, and using the data collected to enable better decisions. We recommend that organisations work with experienced partners such as SurveyAR, so they can focus on the outcomes rather than worry about how to get drones in the air. I'm excited to see how drone use progresses in the environmental monitoring sector.' 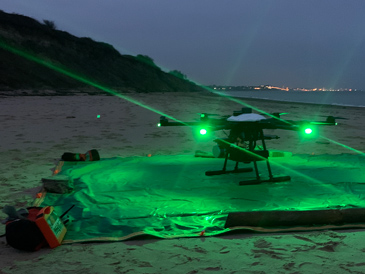 One of the heavy lift Dragonfly drones used in the surveys

Expanding the range of drone surveys

The data outcomes can also be used to support flood catchment modelling, pollution discharge monitoring, infrastructure management, habitat classification and condition monitoring. In the future, the use of long distance beyond visual line of sight (BVLOS) rotary or fixed-wing drones can extend each survey's reach and range.

To incorporate drone-based surveys into the ACMP, we need to streamline the pre-survey requirements, such as landowner permissions and assent for designated sites, as well as developing our understanding of the scenarios in which drones can offer the greatest value.

A full case study of the drone surveys mentioned in this article and a video on the Drone Pathfinder Catalyst Coastal demonstration is available from Connected Places Catapult.

Related competencies include: Management of the natural environment and landscape, Remote sensing and photogrammetry, Surveying and mapping

go to article Why standardised leases can help telecoms talks