APC candidates need to know how to identify risks relating to asbestos when inspecting premises, and be mindful of their responsibilities. But guidance from RICS and other organisations can help

Asbestos removal on a roof

Asbestos remains a deadly risk in some older buildings, so every surveyor needs to know how to identify its presence. An awareness of asbestos is also particularly relevant to the mandatory competency Health and safety, as well as to technical competencies such as Inspection and Legal/regulatory compliance.

At Level 1 for all these competencies, candidates need to understand what asbestos is and why it is regulated. At Levels 2 and 3, they may be able to provide examples of having dealt with asbestos-related issues or advised a client on the implications of its presence.

This article will take candidates through some of the key issues to consider in relation to the substance, including the new Asbestos: legal requirements and best practice for property professionals and clients RICS guidance note.

Be aware that, in this article, the term 'ACM' is used to denote asbestos-containing material, but in other contexts it can be used to denote aluminium-composite material in cladding. Candidates should therefore note the differences in their use, and if in doubt state the full name rather than the abbreviation.

All surveyors need to be aware of the risks relating to asbestos, so they can advise clients diligently and protect the health and safety of themselves and others. Asbestos is harmful to health, and the World Health Organization classifies it as a group 1 carcinogen, which means that there is significant evidence of it causing cancer in humans.

If asbestos is disturbed, it releases fibres into the atmosphere that, if inhaled can lead to asbestosis, one of the complications of which can be the cancer mesothelioma. There is often a lag between exposure and health issues, which can be between 20 and 50 years, and around 20 tradespeople die each week in the UK from previous exposure to asbestos. As symptoms tend only to be noticed years after exposure – sadly, once it is too late – this makes asbestos-related diseases extremely challenging to treat.

Where to look for asbestos

Asbestos is a naturally occurring fibrous mineral silicate that was historically used in many building materials and components. These include:

There are three types of asbestos: crocidolite, which is blue; amosite, brown; and chrysotile, white. While blue and brown asbestos were banned in the UK in 1985, white asbestos remained legal until 1999. Even now, only 60 out of around 200 countries globally have banned asbestos. Its use is still permitted, for instance, in Russia, India and China, accounting for 66% of asbestos applications and 40% of the world's population.

Surveyors may encounter asbestos-related issues at various stages in the property life cycle, as shown in Figure 1. 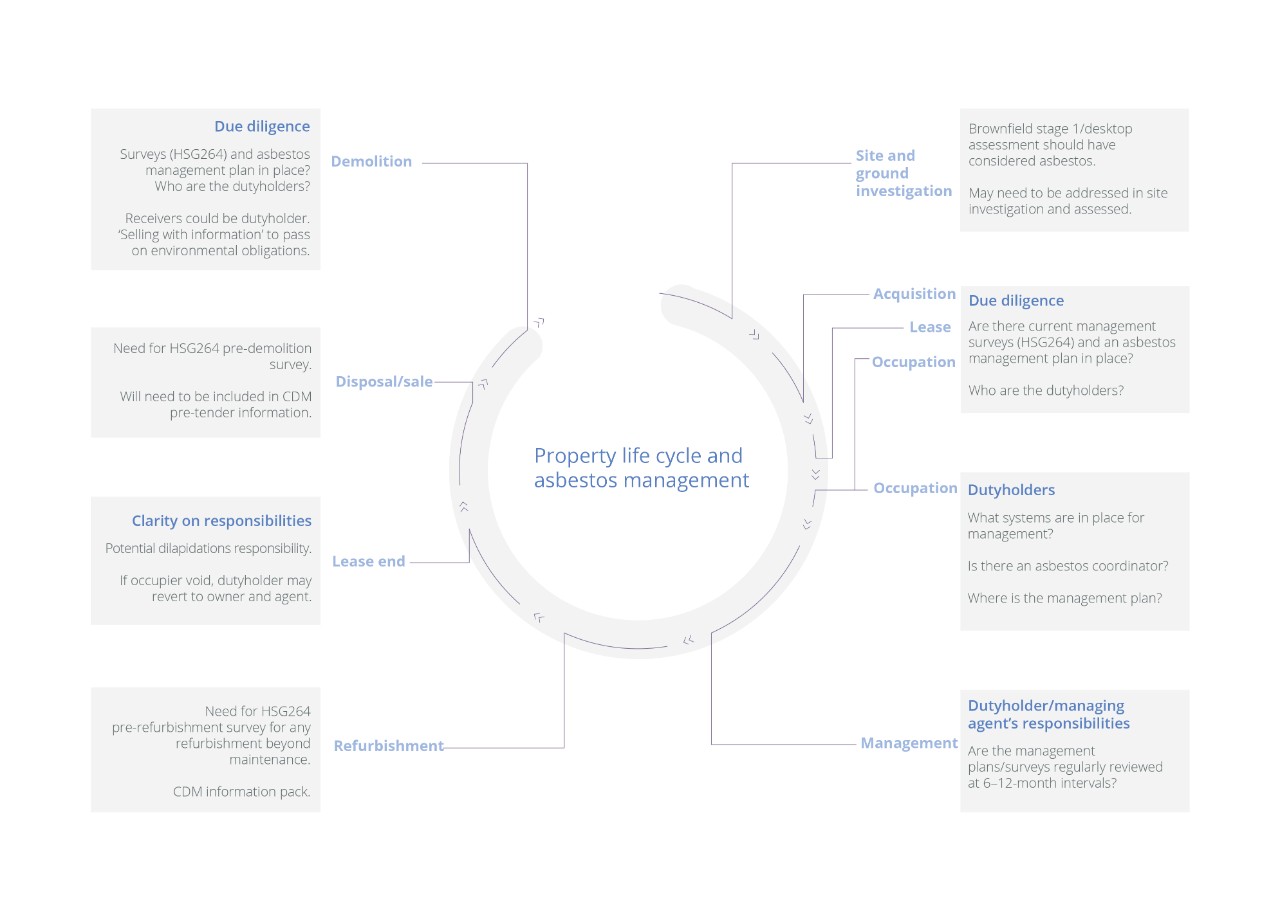 If a building was constructed before 2000, then surveyors should always assume that asbestos may be present. The key thing to remember is to seek specialist advice when conducting inspections on all such buildings, as most surveyors will not be qualified to advise clients about asbestos.

However, at Level 3 candidates can advise clients on the implications of its presence, for instance in valuation instructions or refurbishment/demolition surveys.

'If a building was constructed before 2000, then surveyors should always assume that asbestos may be present'

All surveyors should familiarise themselves with the legal requirements detailed in the new RICS asbestos guidance note. While it relates specifically to UK legislation, it is of wider international application given that it also represents best practice.

Surveyors also need to be aware of the following legislation, regulations and guidance:

The Health and Safety at Work etc. Act 1974, which places a duty of care on them to manage and control asbestos-related risk.

The Control of Asbestos Regulations 2012, which detail specific duties relating to the management of the substance.

The Construction (Design and Management) Regulations (CDM) 2015, which relate to health and safety in construction.

Other government guidance, such as CL:AIRE guidance on asbestos in soil (CAR-SOIL).

All surveyors should have received asbestos awareness training in line with the Control of Asbestos Regulation 10 as well, including how to identify asbestos when inspecting premises.

A duty to manage asbestos arises under Control of Asbestos Regulation 4 and applies to all non-domestic premises, including public buildings and the common parts of houses in multiple occupation.

Where the duty to manage under regulation 4 does not apply, a duty arises under sections 2 and 3 of the 1974 Act for anyone conducting business, e.g. landlords, to minimise the risk from asbestos to the health and safety of others in domestic premises. The Defective Premises Act 1972 and the Homes (Fitness for Human Habitation) Act 2018 also emphasise this duty in domestic premises. The duty can be fulfilled by ensuring that an asbestos register is available, assessing the risk of any asbestos present and making this information available to anyone liable to disturb it.

Appendix B of the guidance note sets out how to identify the dutyholder, and how the duty to manage applies to a variety of asset types. Where an organisation owns premises, for instance, it will be the dutyholder and have an obligation to manage asbestos and ensure the safety of its staff.

Where a managing agent is instructed, the landlord as the dutyholder cannot delegate the statutory duty to manage asbestos. However, the landlord can claim – contractually, or in tort for a non-contractual duty – against the agent if any action or inaction contributes to the former's failure to comply as a dutyholder. The agent will also have a duty to manage asbestos risk under the 1974 Act. If the landlord is absent the dutyholder may acquire additional responsibilities, because they may be considered to be in charge of the property.

If a surveyor is instructed to carry out refurbishment or building works, they may have a contractual duty and direct responsibility under regulation 5 to collate information on asbestos risk in the form of refurbishment/demolition survey before works commence. This could include ensuring the client provides this as part of the pre-construction information required under CDM 2015.

There are many other instances where surveyors may acquire or have a duty of care in relation to asbestos risk management, so they should ensure they read the guidance note in full.

Control of Asbestos Regulation 4 imposes a legal duty to manage asbestos if it is present or presumed to be present. This includes the requirements to:

Full compliance will be achieved where an asbestos register and AMP are held and implemented.

The asbestos register should be updated annually, or more frequently if the risk of deterioration is high. It should also be provided to contractors or surveyors when inspections or work are being carried out.

The management plan should be reviewed every six months or after refurbishment, change of use, or revisions to company procedures.

In the event of a substantial breach of the 2012 Regulations, the penalties include an unlimited fine and up to two years' imprisonment.

If asbestos needs to be removed, then contractors must comply with the 2012 Regulations. Higher-risk work is generally required to be undertaken by a licensed contractor (licensable work), e.g., removing sprayed coatings or work involving loose fill insulation.

For the removal of licensable asbestos, workers need to be on the licence list. Non-licensable asbestos means, as would be expected, that contractors do not generally need to be licensed, but they must be suitably trained all the same. However, in some cases even non-licensed work must be notified to HSE, written records kept and contractors placed under health surveillance by their GP.

In any case, all ACMs must be disposed of at a site licensed by the Environment Agency.

Candidates should be aware of the following in relation to any Level 2 or 3 examples involving asbestos:

Asbestos remains a killer, despite legislation and guidance aimed to reduce the harm to health. Being aware of the risks associated with the substance and managing them diligently is therefore essential for all surveyors.

A lack of understanding is likely to lead to a referral during the APC – particularly because providing a high standard of service and promoting trust in the profession are two of the five professional and ethical standards.

Jen Lemen FRICS is a partner at Property Elite, providing training and support to APC and AssocRICS candidates

go to article Why standardised leases can help telecoms talks

go to article Data, digital risk and the ESG agenda