Online resources offer multiple ways to establish the provenance of a work of art, as a case study of one painting shows

Sotheby's New York, where 'Les Petits Dénicheurs' was sold in 1994

It should come as no surprise that access to provenance-related information continues to increase as technology advances.

New details come to light on a daily basis, dictating that every work of art should be thoroughly researched before each transfer of ownership. Artworks that were sold with limited, undated provenances in the past may now be updated through a reliance on 21st-century resources. This assertion is further exemplified through a case study of Jean-Baptiste-Camille Corot's Les Petits Dénicheurs (c.1872-73).

On 16 February 1994, Jean-Baptiste-Camille Corot's Les Petits Dénicheurs, appeared in the 19th Century European Paintings, Drawings and Sculpture sale at Sotheby's New York as lot 44. The painting sold for $1.1 million USD (including buyer's premium) after being presented with a limited, undated and unpunctuated provenance. In the face of 122 years of uncorroborated history, this article examines how researchers can fill in the gaps with the aid of digital resources. 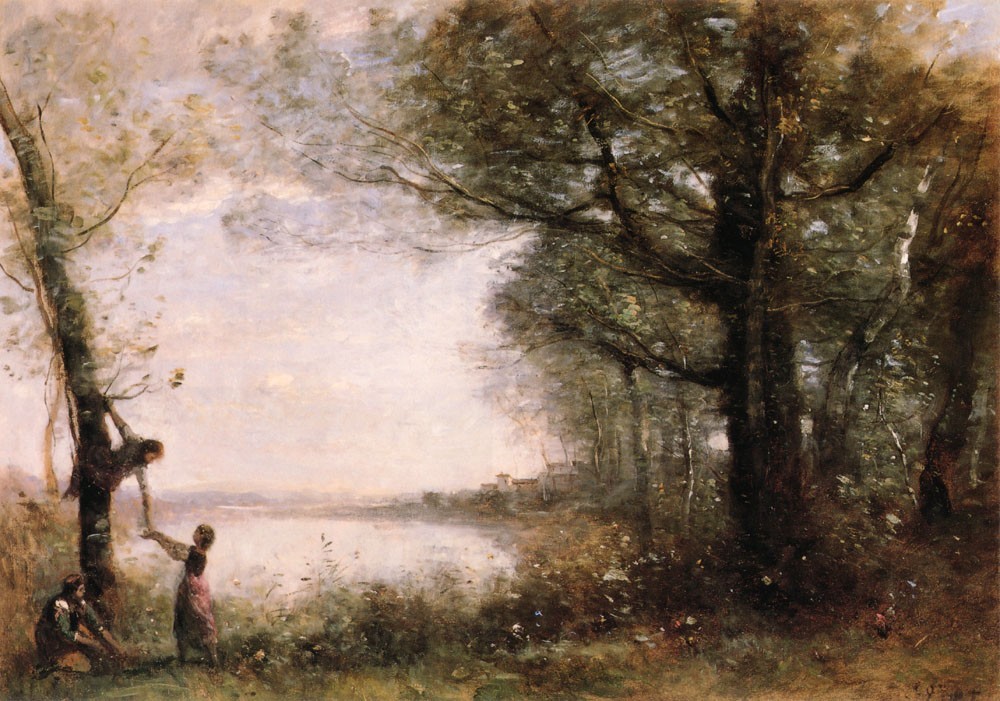 The International Council of Museums' (ICOM) Code of Ethics defines provenance as 'the full history and ownership of an item from the time of its discovery or creation to the present day, through which authenticity and ownership are determined'.

At the same time, most institutions format their provenance slightly differently. Yet, many similarly rely on punctuation to record transfers of ownership: a semicolon can be used to indicate that the work passed directly between two owners while a period can be used to separate two owners if a direct transfer did not occur or is not known to have occurred.

The catalogue raisonné, as with most artists, remains one of the first places to check the status of an artwork. The original 1905 edition of Alfred Robaut's L'oeuvre de Corot is readily available for researchers on the Internet Archive. A review of this publication immediately offers the gift of dates and punctuation. Robaut includes two versions of Les Petits Dénicheurs. Each version is reproduced, with this painting identifiable as No. 2308, updating the 1994 provenance for the years 1872–77.

The famous family's empire was built by John Jacob Astor in the 1800s, the US's first multimillionaire. He constructed an enduring legacy built around markets such as fur, illegal drugs and real estate. Since then, the fortune has predominately been inherited patrilineally, with branches in the US and the UK. With a plethora of John Jacobs and Williams, the line of inheritance can be difficult to follow. However, their family history is accessible online if you have the time to decipher it. 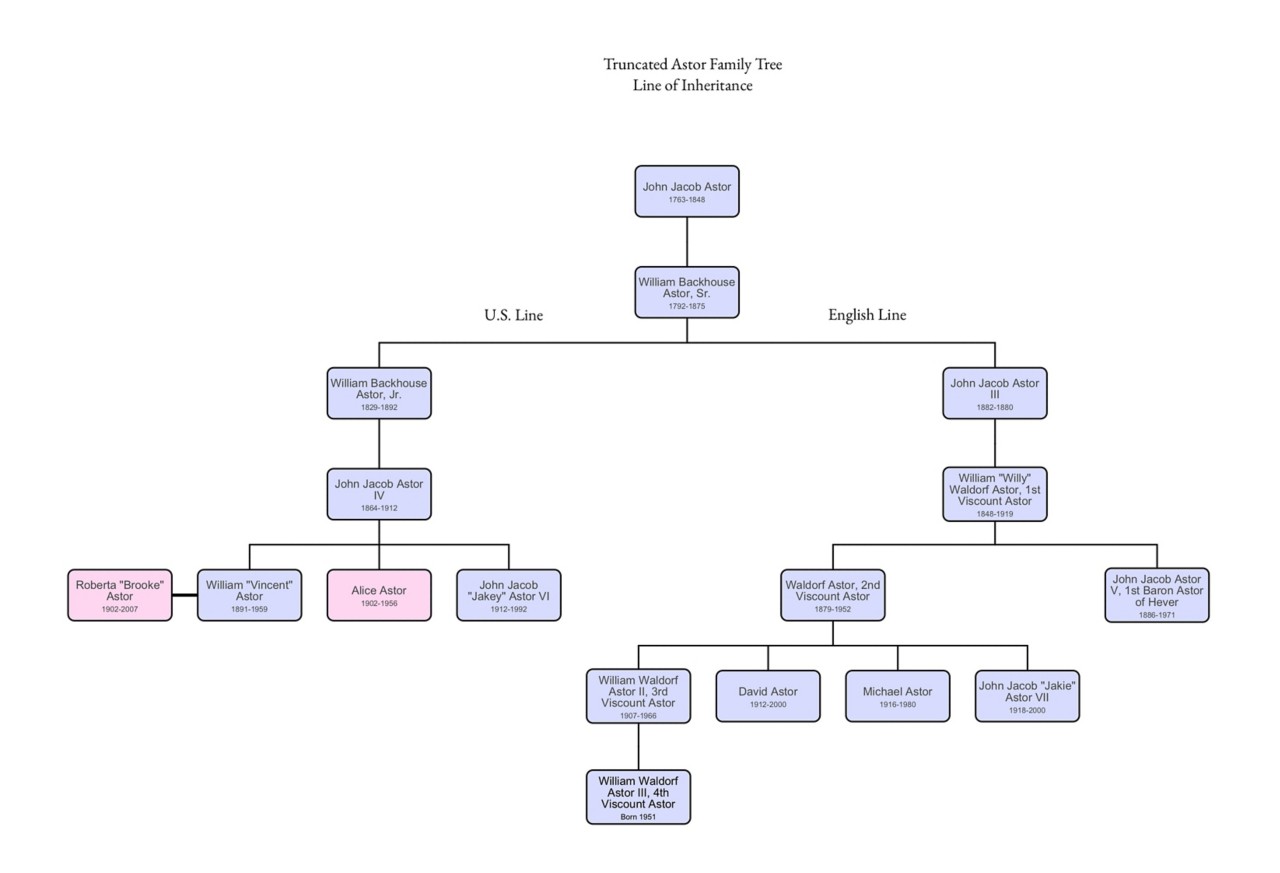 Without dates or a middle name, we are left to traverse a sea of William Astors dating as far back as 1792. Without location or punctuation to indicate transfers of ownership, we must wonder whether the painting passed through the American or British branch of the family. The latter attained the peerage, with William Waldorf 'Willy' Astor serving as the first Viscount Astor. This question is redoubled by the auction catalogue's use of 'Esq.'. In the US, the term is often reserved to indicate one's profession as an attorney. However, in the UK, it can also be ascribed to those who are members of the landed gentry but below the status of a knight.

The literature sources enumerated in the 1994 auction record indicate that the painting resided with a family member who exhibited his collection in the US during the 1880s. This narrows the search to two William Astors: Willy Astor or his uncle, William Backhouse Astor Jr.

The auction record also cites Catalogue of the Private Collection of William Astor, New York, n.d., no. 28, p.10 (as The Nest) and should help determine which William was indeed the owner. A WorldCat search indicates that the only publicly available copy of this publication is held at the New York Public Library. Upon viewing the handwritten book in person, I noted a number of missing pages and did not find the piece in question.

The second literature reference, Edward Strahan, The Art Treasures of America, Vol. II, New York, 1977, p. 78 (as The Nest, belonging to Mr William Astor, New York), again led me to the Internet Archive. This source, originally published in 1881, includes The Nest amongst the holdings of 'William Astor'. Again, no differentiation is made between members of the Astor family with the same name.

With at least a 117-year gap remaining in uncorroborated ownership history, spanning the Second World War, I turned to several online databases to ensure that the painting is not recorded as looted. The Getty Provenance Index reveals an acquisition record:

The Vincent Astor Foundation Papers offered possible corroboration of the William Backhouse Astor Jr theory. The online finding aid lists the 1957 last will and testament of Vincent's mother, Ava Ribblesdale, and the 1912 appraisal of William Astor's Estate among its 'Miscellaneous' contents.

Ava Ribblesdale's last will and testament indicates that she did not leave anything to her son, Vincent Astor. However, the 1912 appraisal of William Astor's Estate enumerates the art located at 840 Fifth Avenue, formerly the renovated home of John Jacob IV and his mother. This document lists a Corot painting titled Le Nid, which translates to The Nest, valued at $60,000 USD. This information confirms that the painting passed by inheritance from William Backhouse Astor Jr to John Jacob Astor IV to Vincent Astor.

Le Nid, along with a series of other objects, was crossed off of the appraisal list in pencil and dated '12/1/24', with their values subtracted from the total valuation of William Astor's Estate. Combined with the fact that the painting in question is detailed as part of the John Jacob Astor IV collection in a digitised edition of Munsey's Magazine from 1910 but is missing from the digitised catalogue for the 1926 estate sale of 840 Fifth Avenue, it can be reasonably deduced that Vincent Astor kept the work in his personal collection before deaccessioning it in 1953.

The same stock book entry that details Knoedler's acquisition of the painting from Vincent Astor also notes that the painting was sold to the Texan philanthropist Amon G. Carter in 1954.

The online finding aid for the Amon G. Carter Papers, held in the eponymous museum's collection, confirms that Les Petits Dénicheurs was, at one point, in Carter's personal collection. An email exchange with a museum archivist provided access to the Knoedler receipt, confirming the original Sotheby's provenance. As indicated by the finding aid, Les Petits Dénicheurs was one of several paintings and bronzes that were not included in the museum's permanent collection, which was created from Carter's personal collection upon his death in 1955. Neither the museum nor the Amon G. Carter Foundation were able to locate any information detailing its deaccessioning.

Galleries or dealers through which artworks have passed can also be helpful. Now, more than ever, the internet makes it possible for researchers to contact these resources regardless of location. In this case, 'Richard Green Gallery, London' is the last line in the 1994 Sotheby's provenance. My email inquiry and phone call with Jonathan Green at London's Richard Green Gallery unearthed even more provenance information:

In the case of Les Petits Dénicheurs, the availability of digital resources enabled me to construct a history for this painting with a methodology that was non-existent before its 1994 sale. Starting without dates or punctuation, I was able to expand the provenance and fill in approximately 100 years of ownership history. More resources may soon come to light allowing further expansion. As always, provenance is never absolute.

Aubrey Catrone is an owner and consultant at Proper Provenance, LLC

This article was originally published in Worthwhile Magazine on 13 January 2021.

go to article An A–Z of accounting practice for APC