On the lookout for wood-boring insects

How do rotting timbers lead to infestations of wood-boring insects?

A diseased or infected piece of wood

The cycle of degradation from damp usually follows a clear path. It starts with moisture levels above the normal hygroscopic states that are due to numerous building defects, which then lead to damp and mould. This can be made worse by poor ventilation, lack of heating, and moisture generated by occupiers.

If untreated, the damp can lead to rotting timbers, which create a breeding ground for wood-boring insects that exacerbate their decay. In extreme cases, leaving these issues unresolved can mean the wood will become a food source for various species of beetle as well as larger vermin.

Therefore, the signs of these insects usually indicate dampness in the property beyond normal, acceptable levels. These include a floor that is undulating underfoot, a skirting board with a cuboidal surface or a floorboard that has 'dart holes' in it; note that problems may often be hidden beneath floor coverings. A common mistake is to employ a commercial company to kill the wood borers with insecticides – this is pointless if the originating dampness is not controlled.

If enough moisture exists inside a property, then any nearby timber elements are likely to suffer from wet and possibly dry rot. Common areas include the bottom of newel posts and timber door linings, timber skirting boards, the bottom stair risers, timber floorboards and the end of joists attached to an external wall. Rot can also be found in roof timbers and timber wall panels, especially in older buildings.

Wet rot usually results when a property has been poorly dried after a flood or water ingress, due, for example, to defective rainwater goods, or internal issues such as leaking plumbing. It can also be found where wood has a moisture content typically of 50–60 per cent or above. The most common species of wet rot fungus is Coniophora puteana.

Dry rot can occur where timber has a moisture content of 30–40 per cent. It doesn't need perfectly dry conditions and often occurs in less-ventilated places, such as within a floor void or behind timber wall panelling. The trapped moisture creates an ideal spawning ground for the fruiting body of the Serpula lacrymans fungus and its mycelium hyphae, being the cobweb-like strands that extend from the fruiting body.

Most historic buildings have solid walls or timber frames, so it's even more critical to prevent water ingress and ensure they are properly ventilated, particularly in subfloor areas. Original timber wall panels can create a void between the panelling and substrate masonry wall in many old buildings; any moisture inside the void can cause problems as the atmosphere will be a spawning ground for the dry rot fungus and consequent wood-boring activity. It is especially important that remedial actions use the correct materials, for example, matching the correct limes to a fabric, such as masonry or stone. This can be the crucial difference between mitigating a dampness problem or encouraging it.

If the moisture content in timbers is 20–22 per cent or higher, then an outbreak of wood-boring activity can be expected because these are the conditions where the insects and their larvae excrete enzymes that can digest the cellulose of the timber. As ever, regular maintenance can prevent and rectify many of these problems. But if softwood timber has a moisture content of 12 per cent or below, then it is probably too dry for any larvae to survive. Hardwood timbers, such as oak or elm, can tolerate slightly higher moisture levels before problems begin to manifest, and some commentators in the conservation sector have found that if the moisture content can be kept below 18 per cent then the deathwatch beetle will remain dormant in hardwoods.

The type of wood-borer does not depend on whether wet or dry rot is causing the decay: the common furniture beetle, deathwatch beetle – usually found in central and southern England – and longhorn beetle, found closer to London, are among the most common insects found tunnelling in rotting timbers. Many other species are regional. The females lay eggs in cracks and other crevices. These can remain dormant for long periods until reactivated by raised humidity or direct moisture conditions in the timber. Damage is usually confined to the outer sapwood layer of a timber, although in long-term infestations, wood-borers can tunnel into the heartwood.

The only insects that go straight to the heartwood are termites, which are generally only found in Europe in the latitudes from the south of France and below, and in warmer climes. Wood-borers' life cycle in cooler climates such as the UK means that they are more active between April and August but can lie dormant for the rest of the year. A survey conducted in January or February may find the conditions for activity but neither their presence nor the frass they produce, which is the small deposit of dust often found where they have been active.

If I suspect their presence, but they are inactive, I often paste a piece of tissue or soft paper over the timber. On a return visit during their active months, I check for any holes through the tissue that have been caused by wood-boring activity. Cobwebs with lots of caught insects may be another signal.

The existence of damp, mould and wood-boring insects may mean there is a case against landlords under the Homes (Fitness for Human Habitation) Act 2018. This incorporates all 29 category 1 hazards in the Housing Health and Safety Rating Scheme (HHSRS), part of the Housing Act 2004. If a problem is entirely related to the physical building, such as a broken rainwater pipe, then most of the above legislation can be used against a landlord and would result in action in both the magistrates' court and the civil courts. 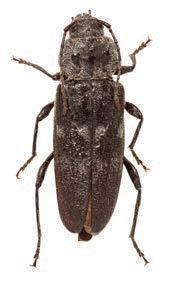 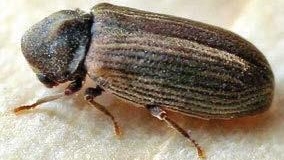 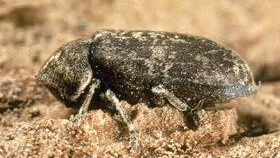 Prolonged dampness in the home is directly related to ill health due to the increase in mould spores. Insect infestations do not often directly affect occupants' health, but they signal an underlying and prolonged damp issue. There is the risk of injury through a weakened structure as well: I've known cases where floor joists have started to powder and weaken because they have been eaten away. I encountered an infestation in a Victorian property that was so severe my foot went straight through a floorboard in the entrance hall.

The key to controlling insect infestations is controlling moisture. Once there are signs of decay and insect activity, then its usually too late to prevent further deterioration. These clues should trigger an urgent investigation into the cause of damp.

Mike Parrett is a building pathologist, chartered building surveyor and founder of Michael Parrett Associates. He is an eminent fellow of RICS and the lead author on the Damp section of isurv info@michaelparrett.co.uk

A converted Victorian building contained four apartments. The basement apartment had a rear glass conservatory that meant external access to the upper floors and roof was difficult and prevented the gutters from being cleared. A cast-iron gutter had been leaking above the rear kitchen of the fourth-floor flat and water had been soaking into the solid walls below. The floor joists between the third and fourth floors were embedded into the external masonry walls. Water was penetrating through the solid walls into the ends of the joists, which had begun to rot.

This was exacerbated by a plumbing leak in the rear of the fourth-floor kitchen that was wetting the timber floor and its joists. This was the perfect environment for an outbreak of the dry-rot fungus Serpula lacrymans, and the mycelium leading off the fruiting body was one of the largest I've ever seen. The ends of the joists and the floorboards underneath the kitchen sink on the fourth floor had deteriorated almost to the point of collapse, and its floor had both upwards and downwards movement. Meanwhile, the third-floor bathroom ceiling was flexing.

These conditions gave rise to an infestation of the common furniture beetle. The wood-boring activity had spread through damp timber floorboards and some floor joists, adding to the severity of their structural weakness and necessitating complete and partial replacements beyond the affected areas. Extensive remedial actions involved putting up complicated scaffolding, replacing infected joists and floorboards, using galvanised joist hangers and fixing the defective gutter. 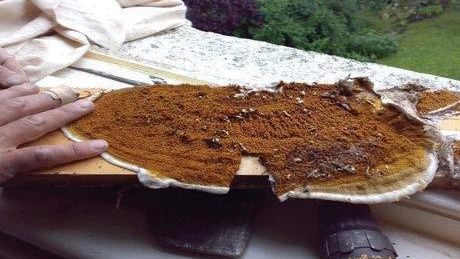 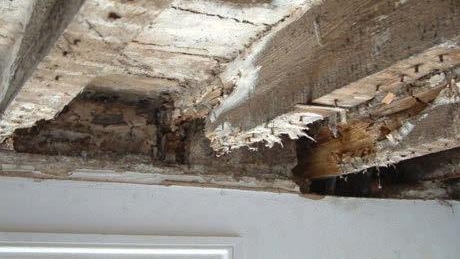 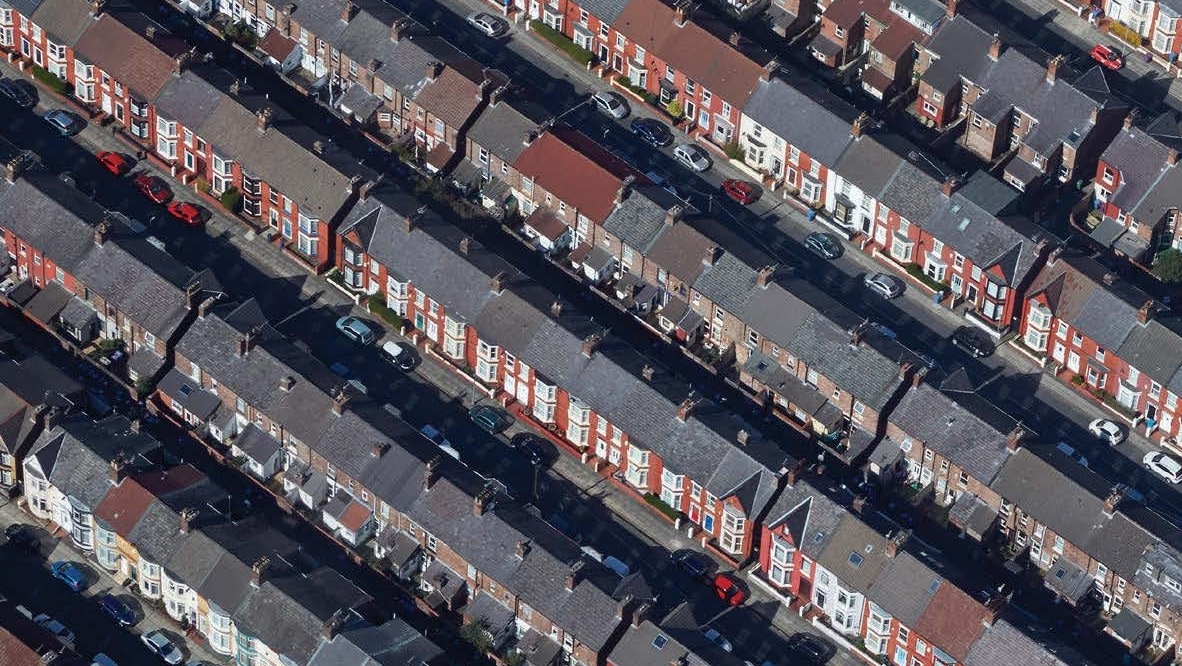