Coworking in a crowded market

It's the trend that swept the offices sector, and now the big guns want a piece of the coworking action. But in a crowded marketplace what can traditional developers offer that the new breed of flexible workspace operators can't?

Like many influences on modern life that are now part of the mainstream, from wellness to smartphones, the concept of coworking can be traced back to the west coast of the US.

In his 2015 report, The rise of coworking spaces, sociologist Dr Alessandro Gandini sees the roots of this workplace trend as we know it – individuals and small businesses working alongside each other, paying a monthly membership fee with services pooled for efficiency and to encourage collaboration – in what was then termed "new media" production companies in the early 2000s. Fast-forward to the global financial crisis, and there was a perfect storm for the phenomenon to gather pace with landlords having a surplus of office stock ready to rent out at a discount and a crop of freshly laid off individuals ready to pursue their entrepreneurial dreams with just a mobile phone and a laptop.

Tim Oldman, CEO and founder of workplace consultant Leesman gives some context for 2019: "Most of the coworking propositions in London are retuning people at the bottom end of the millennial generation, so huge numbers of entry-level employees are experiencing entrepreneurial start-ups but with the quality of the accommodation that even the big corporates can't provide."

Coworking is now an established part of the property scene. Cushman & Wakefield in its Coworking 2018 report states that the various types of flexible working – among them serviced offices, virtual offices and dedicated desks, which are generally referred to under the catch-all term of coworking – currently occupy 10.7m ft2 (0.99m m2) or around 4% of London's office stock.

And it's a similar story across the globe, Cushman reports: 27m ft2 (2.51m m2) in key cities in the US, a leap of 20% in just two years, while it estimates that the sector will account for 15% of total office supply in Southeast Asia by 2030 in cities such as Hong Kong, Singapore and Shanghai.

Although it might have been started by smaller specialists, these days more traditional property players are fighting back, seeing the efficiencies in densities achieved in flexible workplaces compared with those of traditional offices, meaning more tenants can use the same space and greater rents can be charged. In Cushman's August 2018 report on the US market, Coworking and Flexible Office Space, for instance, the density was 55-85 ft2 (5.1-7.9 m2) in coworking, compared with 145-175 ft2 (13.5-16.3 m2) in the traditional office market.

A case in point for traditional landlords entering the fray is the Crown Estate, the formation of which dates back to 1066. It launched its first flexible working space at One Heddon Street in London's West End earlier this year. The site has 350 desks and a variety of membership options. The firm's central London portfolio director, James Cooksey MRICS, says the property "is the first in a pipeline of projects, which will broaden our offer, to ensure we continue to support the changing needs of today's businesses". As well as the private offices and hotdesks familiar to coworkers, One Heddon Street also boasts an events space hosting everything from yoga classes to thought-leadership seminars. This therefore recreates the sense of community underpinning the physical space that the coworking operators have long pioneered.

"The positive effect of coworking is that investors and developers are increasingly recognising occupiers as customers" Robert Campkin MRICS, Colliers International 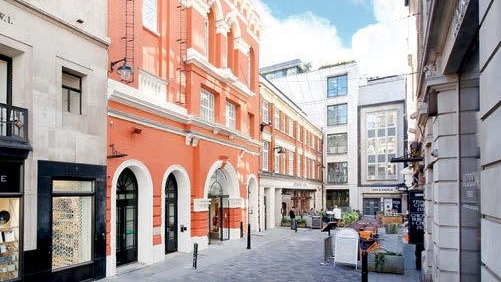 Boasting an event space as well as 350 desks, One Heddeo Street represents the Crown Estate's first foray into the coworking sector 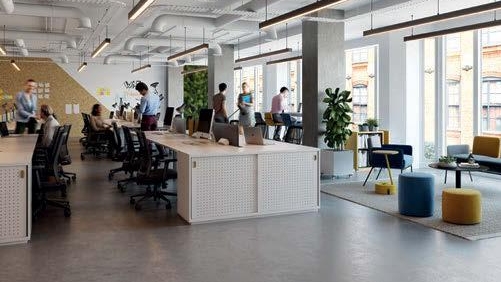 And this same trend for developers to provide their own iteration of coworking can be seen around the world. Slovakian developer HB Reavis's HubHub brand has locations in Warsaw, Bratislava, Budapest and Prague, as well as London. In the US, Tishman Speyer has developed Studio: a mix of lounges, private meeting rooms and curated programming. The initial concept space, which opened in late 2018 at New York's Rockefeller Center, is nearly 35,000 ft2 (3,252 m2) and will be joined by locations in six key markets, among them Washington DC, Los Angeles and Frankfurt. "We understand the importance of agility and the need for companies of all sizes to be able to move quickly and scale as needed," says Thais Galli, Tishman Speyer's senior director of innovation.

Developers such as these have the availability of offices at their disposal of course: they own – rather than lease – the buildings in which their coworking spaces are based. Not only that, but if it's a new build, they have control over how they are designed and fitted out, from the position of lifts down to the quality of the mechanical and electrical elements, while coworking providers have to work within the spatial parameters of the buildings that they lease. Landlords would argue this gives their coworking product the ability to better deliver what end-users want, whether that's natural ventilation, energy-saving lighting, or floorplates that have the optimum mix of private offices and communal spaces.

Emma Swinnerton, head of flexible workplace solutions for EMEA at Cushman, isn't surprised that firms who own office buildings have got in on the coworking act: "They have seen operators making a significant financial return, which could make them think 'should I be doing this myself?' The other aspect is control and developing relationships with tenants, if you have a third-party occupier doing that."

Couple this with the fact that WeWork is reporting that 20% of its revenues come from enterprise clients who typically enter into leases of between one and three years, a proposition that is edging closer to what developers and landlords offer their tenants directly, and it's easy to see why industry heavyweights such as Landsec have got on board in a bid to cut out the coworking middle man. Its Myo brand opened its first space last month, for businesses of between 15 and 80 people, in the company's Nova development in London's Victoria.

"We saw a gap in the market between coworking and long-term leases," explains Oliver Knight MRICS, head of Myo. The thinking goes that these smaller companies will forge a lasting relationship with the landlord directly. When they outgrow this type of space, there are options within the rest of Landsec's portfolio for them to decant into. "We're also looking to attract existing customers who want to have accommodation for specific projects or require additional amenity space, meeting rooms or a place to hold events," Knight continues. 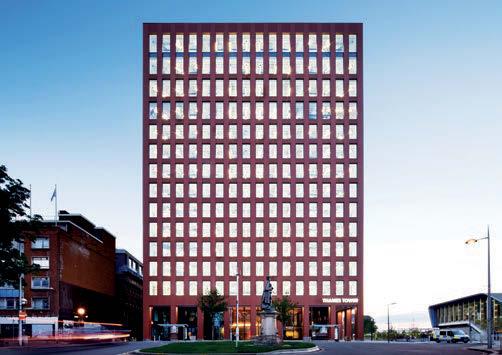 Developer Landid has taken a different approach, signing operator Fora on a long lease at Thames Towers in Reading

Seeing coworking as something to draw in not only SMEs but also corporate clients is a view shared by Chris Hiatt FRICS, director of Landid, which has developed several buildings along London's western corridor. "The way the market's going, particularly outside London, is that larger tenants looking for 100,000 ft2 (9,290 m2) will take 50,000 ft2 (4,645 m2) on a long-term lease and the rest on a more flexible basis," he says.

Rather than develop its own product, however, Landid has opted to put coworking providers into its buildings. Spaces operates out of the Porter Building in Slough and the Charter Building in Uxbridge, while Fora has a long lease at Thames Tower in Reading. "They are set up to do it as a business," says Hiatt, explaining this business model. "Plus, having them in helps sell the story of the building and gives other tenants the option of extra space that is more flexible."

This is not the only model for landowners and investors to get a slice of the coworking pie. Investment firm Blackstone acquired the majority stake in The Office Group in June 2017 in a deal that valued the business at £500m, and Brockton Capital have made significant investment in Fora. There is also the option of pursuing a joint venture with a coworking operator, as Network Rail did in 2011 with The Office Group to refurbish empty space in five main-line stations.

"Time will tell who are the winners and the losers but serviced offices require very specific skills sets and management akin to hospitality" Matthew Greenstreet FRICS, Director, Drees and Sommer

"Time will tell who are the winners and the losers but serviced offices require very specific skills sets and management akin to hospitality, which are not traditionally part of an investor's core business," says Matthew Greenstreet FRICS, director in project management and construction at London-based consultant Drees & Sommer. He points out that speculative office developers are building-in concierge-style customer service – so at Landid's properties, for instance, you might see everything from dry cleaning, to a "little black book" of suppliers, to after-work beers being offered. "I don't see serviced offices as a new asset class – it's a transformation of an existing one," Greenstreet continues.

Robert Campkin MRICS, EMEA head of corporate capital solutions at Colliers International, sums up the implications for the market: "The traditional relationships between landlords and tenants had left some occupiers feeling neglected. The positive effect of coworking disruption for everyone is that investors and developers are increasingly recognising occupiers as customers. They are becoming more in tune with the occupier's increasing demand for flexibility, and heightening their service levels and efforts to accommodate a business's bespoke requirements."

From top: Boasting an events space as well as 350 desks One Heddon Street represents the Crown Estates first foray into the coworking sector; LandSec opened the first space under its Myo brand last month at Nova in Londons Victoria; developer Landid has taken a different approach signing operator Fora on a long lease at Thames Tower in Reading

Images courtesy of the Crown Estate, LandSec and Landid