How to build for the future

How do we meet the challenge of building resilient infrastructure for an unforeseeable future?

There can be few more compelling illustrations of the drastic effects of climate change than when rising sea levels help cause mass flooding. Coastal cities, already sinking into the ground after decades of pumping out groundwater from beneath their streets, are often vulnerable.

In August last year, Indonesian president Joko Widodo announced a radical response to rising sea levels threatening Jakarta: he would move the seat of government out of the city and on to the island of Borneo. Within weeks, Thailand's prime minister Prayut Chan-o-cha raised the possibility of doing the same for Bangkok, another capital city menaced by rising sea levels. 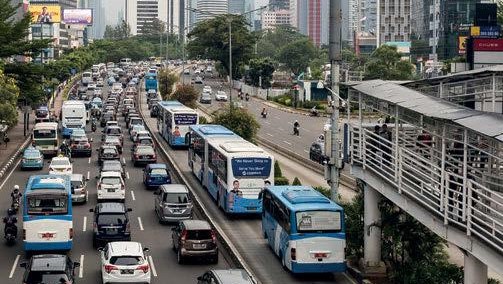 In 2016, Jakarta had the worst traffic congestion in the world, costing the Indonesian economy an estimated £5.4bn a year. Image © Getty

Climate change, the fourth industrial revolution and global political instability are all feeding a growing scale of risks challenging that most risk-averse of businesses: infrastructure. A warming planet brings the possibility of extreme weather and population displacement, resulting in damaged or redundant infrastructure assets. Meanwhile technological change risks leaving traditional infrastructure obsolete, and political turmoil could upend its business model.

Examples abound. In developing Asia, from China to India, billions of dollars continue to be invested in large-scale, coal-fired power stations. But investors in these plants, including global engineering firms, risk severe financial loss if the plants don't remain economically viable long enough to repay their investment. "The politicised nature of electricity prices in Asia's developing countries, coupled with the improving efficiencies and technology employed in renewable energy, will combine to threaten larger-scale thermal power plants," warns Don Stokes, a Singapore-based partner at law firm Freshfields Bruckhaus Deringer, specialising in energy and infrastructure.

Ambitious plans by governments and private enterprise to roll out fibre broadband networks are challenged by the promise of superfast, cheap 5G coverage, which also risks devaluing networks of existing mobile towers. Across Europe, infrastructure investors are perceiving heightened political risk, of which one symptom is tougher pricing settlements from regulators that dictate the returns that gas and electricity network operators can make. UK water regulator Ofwat last year announced record low allowed returns – even as it demanded that water companies do more to innovate and respond to climate change.

"30 years ago, infrastructure was something you built and then fogot about" Arun Mani, KPMG Strategy

This last case, along with the talk of moving capital cities, illustrates something else: that these risks are interrelated. Despite the news headlines when the decision to move the Indonesian capital was announced, sea levels are only one factor: the city is also heavily congested and the government wants to rebalance the economy in other parts of the country. The move is as much political as climate driven. And climate change itself is driving technological transformation by spurring low-carbon technologies. "The world's infrastructure needs are growing, particularly in developing countries, and this infrastructure must be sustainable, low carbon and climate resilient," says Arun Mani, principal at KPMG Strategy in the US.

Organisations such as the World Bank and the G20's Global Infrastructure Hub are urging governments to spend more on infrastructure: the latter estimates a $15tr spending gap will open by 2040 if spending doesn't meet UN sustainable development goals.But how can such spending on long-term assets be justified when the long term is increasingly uncertain? As demand for spending increases, the calculations involved become harder. Can infrastructure be futureproofed, or is it less durable than we thought?

An obvious solution is to spend yet more money building more robust assets. But, says Mani, "building to withstand a 1,000-year event, instead of a 100-year event" can be discounted: "Even if we could accurately predict risks that far into the future, it is often not technically, financially or politically feasible to build systems robust enough to last that long." Instead, he argues, to be resilient, infrastructure should be able to adapt to shocks, such as by deploying a micro-power grid ahead of a hurricane landing, so that damage to power lines does not cause widespread loss of power.

Indeed, Mani contends, smaller-scale and localised infrastructure is inherently more resilient: "Because a local or bottom-up solution takes into consideration the attributes and requirements unique to a region, there's a higher probability of finding a suitable solution than when taking a top-down planning approach." Certain technological changes, such as advances in battery storage, growth in the number of electric vehicles and the rise of drones, are leading to such localised solutions in the form of microgrids, charging hubs and drone ports.

One added complication to ensuring resilient infrastructure is the way in which different types of asset are increasingly dependent on each other. Electrification of cars and heating, for example, when combined with the increase in hard-to-predict power generation from wind and solar farms, has the potential to make it much more difficult to balance supply and demand on the electrical grid, and also disrupt other assets that rely on a steady power supply. This was shown in the UK last summer, when a sudden loss of power combined with unfortunately configured train software to paralyse 30 trains for several hours, spreading chaos across the network. Smart grids connected to the internet will add another layer of interdependence.

"Previously separate verticals around utilities, transport and telecoms asset classes are now much more integrated and much more interdependent," says Greg Bradley, UK head of business advisory at Arcadis. "If any one of those has performance challenges, the overall availability of the asset is compromised, and that is new. Who's accountable for the resilience of that system?"

Legally, making the public and private bodies that own infrastructure responsible for each other is probably unworkable, but a good start would be to encourage them to work together. A lot of this, Bradley notes, will be about managing the vast stock of existing infrastructure, whose value needs to be safeguarded if the private sector is to have confidence to invest in upgrades and new assets. "I think there's an increased need for collaboration and communication between asset owners," Bradley says. "Regulators need to play their part in that, too."

Bradley stresses the need for integrated asset management to cope with risks such as climate change and digitisation, adding: "These pose new and additional asset management considerations in terms of systems planning, technical standards and multi-asset-class asset management: rather than just a railway, perhaps you might have a mobility system. I think the challenge is much more about looking at things in an integrated way, and that is different."

But he doesn't stop at cooperation. Urban masterplanning, involving the simultaneous scoping of multiple infrastructure systems, has the potential to identify how they rely on each other and how best to mitigate the consequences. "If you look at the broader externalities that could happen, if you're confident at a city or combined authority level that you have a clear masterplan of what's required, you can start to look at what your dependencies are," Bradley says.

While infrastructure delivery may adapt to an age of uncertainty, it remains unclear how investors, public or private, can accept the risks involved. "Thirty years ago, infrastructure was something you built and forgot about," Mani comments. "That model is going to change. You can't forget about it, you have to be very mindful, almost on an ongoing basis, about what is impacting your infrastructure."

Governments, particularly in the developing world, are now being urged by multilateral institutions such as the World Bank and UN Development Programme to turn to the private sector for the upfront financing for their infrastructure. But the 20-30-year contracts investors typically demand to recover their investment do not sit well with the built-in obsolescence of digital technology that infrastructure increasingly contains. To overcome this, Australian fund manager Whitehelm Capital has proposed a "smart concession" model for smart city projects, under which it would finance the installation of wireless networks, sensors and communications equipment for essential services, under flexible contracts that allow for periodic upgrading. In April last year, Whitehelm made its first smart city investment in a fibre broadband network for the city of Fullerton in California. The long-term success of this model and whether it can be replicated remains to be seen.

One way to align client interests with resilience is to provide financial incentives. Resilience bonds are emerging as a response to the rising global repair bill from natural disasters, for which insurance doesn't always provide adequate cover. The bonds can be used to pay for infrastructure where bondholders are exposed to a higher than usual risk of losing money if the asset doesn't withstand extreme weather or other shocks. The more resilience the borrower builds into their infrastructure, as measured by specific targets, the lower their interest payments. The bonds are untested, but if they catch on as an ethical investment product in the way green bonds have done, they could start to account for a meaningful share of infrastructure finance.

Infrastructure is a trillion-dollar global industry with a fragmented supplier base, and even if infrastructure can be futureproofed, their effect is likely to be marginal, at least for now. Some assets, and delivery models, may have to fail before the message gets through.

The International Construction Measurement Standards (ICMS) are a set of standards for categorising and reporting costs of building and civil engineering projects from a single total capital cost figure down to itemised costs for doors and windows.

Their purpose is to provide consistent and comparable cost figures for projects worldwide. ICMS are intended to reflect that, while the construction market is still largely a local one, the investor community for property and infrastructure is increasingly global. The standard helps identify the best-value projects to invest in, and the quality of outturn cost data can be improved, leading to improved cost estimation and better control of cost risks. Value for money to clients can be demonstrated, while underperforming projects can be identified.

The RICS website has more information as well as the standard which can be downloaded.

go to article Placing members at the heart of the institution

go to article Are we entering a new age of urban farming?