Geospatial data: revolutionising how we see the world

The potential for geospatial data to improve our daily lives is huge and, so far, largely untapped. The construction and property industry is at the forefront of its development

In recent months, policy makers have pored over maps from health organisations such as Johns Hopkins University that show the deadly spread of COVID-19.

As spring slipped into summer, the blood-red circles representing the number of confirmed cases in major cities swelled and crept westwards, providing a novel and frightening view of a once-in-a century pandemic.

The blend of big data and mapping that underpinned this now familiar tool has quietly become ubiquitous in our lives, whether via the phone in our pocket or in the hands of the government. It can help you avoid traffic or get pizza delivered right to where you’re sitting in a local park, or it can enable you to run the country, informing the toughest decisions on everything from disease control and climate change mitigation to city planning and defence.

“Today, location data is the coal and iron fuelling a new revolution,” Cabinet Office minister Lord Nicholas True says in the UK government’s Geospatial Strategy, published in June. “We will soon get a glimpse of the future – drones being used to map fields, or robots in the street making home deliveries – all making use of geospatial data.” In fact, that future is now: mapping with drones is already happening.

The terminology can be confusing, with “GIS” and “geospatial” often used interchangeably. In short, any data with a locational component is geospatial data. Experts often use GIS (geographic information systems) to analyse this data, mostly by converting it from an incomprehensible bank of numbers into colourful layers draped over maps that’s easier for the non-expert to interpret.

The construction and property industry is the petri dish in which new ideas are being tested, from revealing underutilised government land that could be repurposed for housing, to digitally mapping subterranean cables and pipes, or building digital twins – replicas of major infrastructure projects.

“Big firms may hold good data sets but they are starting to realise if they share some of that information they can be part of something better” James Kavanagh MRICS, RICS Land Group and ILMS Coalition 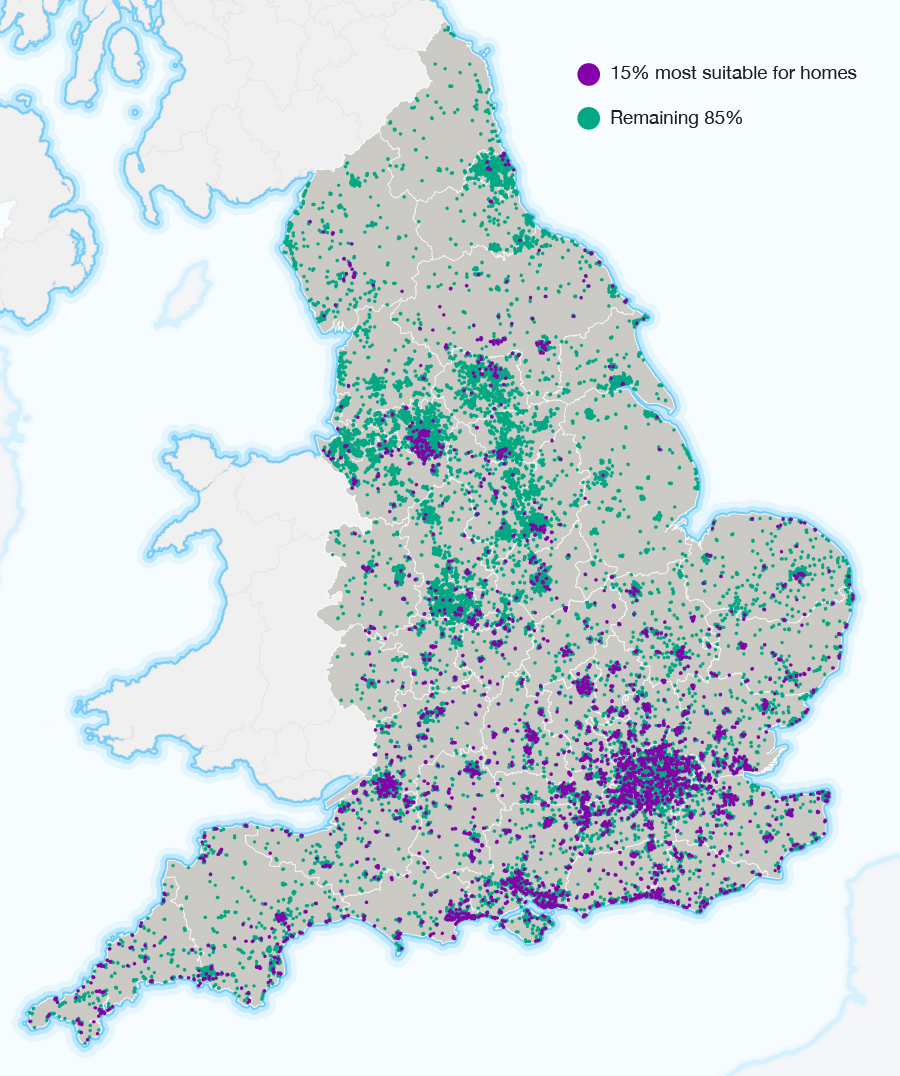 The geospatial team at Knight Frank studied the amount of potential development land for housing tied up across England’s car parks on behalf of the Ministry for Housing, Communities and Local Government (MHCLG).

The study identified 103,000 public and private surface car parks across the country, with a land area of 20,000 ha (49,400 acres). Of this, some 7,555 ha were owned by the public sector. Knight Frank’s estimates suggested that this alone could yield 2.1m homes, or seven years’ supply of housing at the government’s stated 300,000 homes per annum target (although not all were suitable for development).

The study then found that 91% of public sector surface car parks actually have another such car park within a five-minute walk, 21% offer parking for a primary retail centre, 13% only offer provision for secondary retail, and the remaining 66% don’t appear to support any retail centre whatsoever.

Taking this into account, and selecting just 15% of public-sector-owned car parks best situated for housing (in areas with already high public transport connectivity), the study identified the potential to deliver more than 110,000 new homes.

Even so, experts say its potential is still untapped, and with the right political and data privacy developments it holds the key to businesses previously thought impossible.

The UK is leading the field in Europe, at least in part thanks to its open-data sharing policies. The Global Open Data Index places Great Britain as the best in Europe and third globally, behind Taiwan and Australia, for both data accessibility and usability.

Experts from UN member states, meanwhile, have formed the UN-GGIM (United Nations Committee of Experts on Global Geospatial Information Management) in an attempt to form strategies to build geospatial capacity in developing countries, particularly in Africa, where advancements in data sharing and analysis create a step-change for planning access to water and medical supplies, or transport and education.

Substantial obstacles still stand in the way, however, not least the current trajectory of the demand for skills far outstripping the supply. “There is a shocking lack of qualified people globally,” says James Kavanagh MRICS, director of the RICS Land Group and chair of the International Land Measurement Standard (ILMS) Coalition. “The big issue at the moment is capacity, and it’s something the UN is trying to address.”

Even bigger challenges lie in how data is owned and managed.

A 2017 piece in the Economist declared the world’s most valuable resource was no longer oil, but data, and companies do battle to protect what’s theirs. Much of the data required to undertake national, or even city-wide, projects is locked in silos, fiercely protected by the corporates that have gathered it.

That means a mishmash of companies from telecommunications to technology must buy into any project that requires different data sets in order for it to work, rendering many “smart cities” projects at best costly and time consuming and, at worse, impossible.

“Geospatial feeds on the scalability of information, so national, city, borough and ward-level data sets – the more the better,” says Kavanagh. “The big firms may hold good datasets but they are starting to realise if they share some of that information they can be part of something better.” 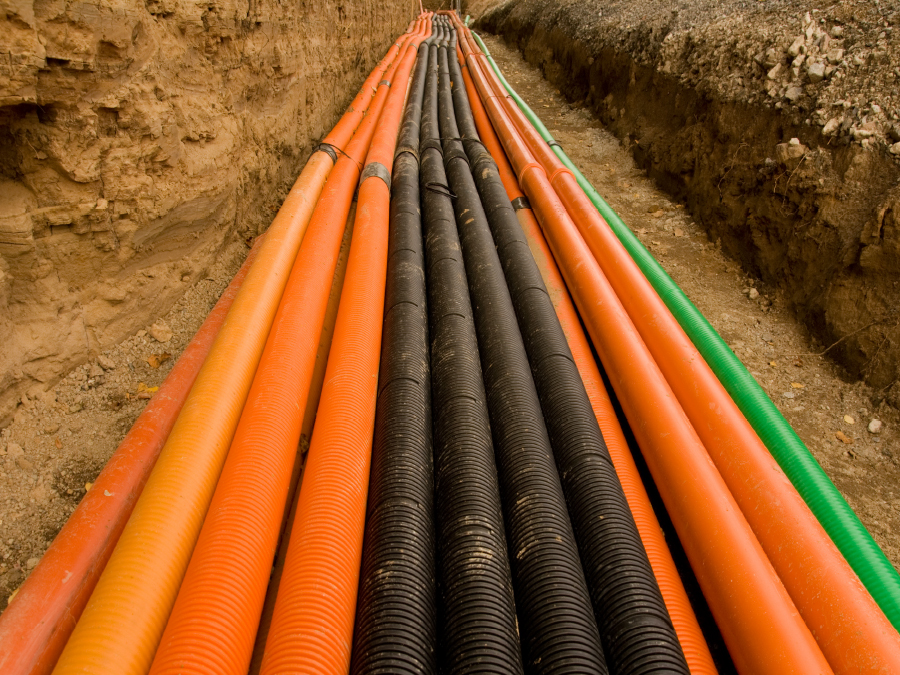 Mapping what lies beneath

Accidental strikes on underground pipes and cables in the UK cost the country £1.2bn a year. Different organisations have their own maps showing where gas pipes and electricity cables are, but the lack of a combined map creates an increased risk of lethal accidents.

The Geospatial Commission is building a National Underground Asset Register, a digital map of all underground assets held by 740 different owners, in an attempt to save lives and speed up projects.

Once complete, anyone on site in an emergency such as a burst water main, could be emailed or texted a link showing an intricate and accurate map that previously would have been stitched together manually after contacting a plethora of private interests.

The biggest obstacle of all, however, is public mistrust. A succession of data breaches by corporate giants, most notably in 2018 when millions of Facebook users’ personal data was harvested without consent by Cambridge Analytica, have made sure of that.

“Our biggest challenge is trust, and that's trust in data and what people will do with it,” says Helen Pickard, group GIS leader at global construction consultant Mott MacDonald. However, “an interesting shift might happen in next few years on how data is stored, who owns it and how it's managed”.

That shift is being led by World Wide Web creator Tim Berners-Lee, who, by 2009, had become disillusioned with the way his creation was being used. He began drafting a plan that would return data to the users it came from, which became a 2018 project with US university MIT under the name Solid. Its aim is to enable the sharing of information in a way that preserves privacy. It could be a game-changer for the geospatial sector.

The project would broadly allow anyone to keep their own data in a pod, instead of private companies storing your personal data on their own servers.

These theories are being replicated in Europe. DECODE, a series of pilots led by the councils of Amsterdam and Barcelona, has been experimenting with pooling data in communities so that “innovators, startups, NGOs, cooperatives and local communities can take advantage of that data to build apps and services that respond to their needs and those of the wider community”.

“It’s about the democratisation of decision making, because if communities can see things they can make more informed decisions,” says Holger Kessler, a technical adviser to the Geospatial Commission. “If you want to plan and do something that affects the public, whether that be a road extension or something like HS2, people should be able to access not just the authoritative data, but also the visualisations to help them better understand the science of things like the environmental impact and noise.”

“It’s about the democratisation of decision making, because if communities can see things they can make more informed decisions” Holger Kessler, technical adviser to the Geospatial Commission

A digital replica of the world

If enough of the world’s data becomes shareable, the scope of advantages are significant. With enough data, according to Kessler, it would be possible to create a digital twin of planet Earth, on which we would be able to conduct accurate experiments in the same manner as the medical profession has on patients for hundreds of years.

“In 50 years we’d hope to have a digital replica, to some degree not unlike the ordnance survey maps of the 1700s, with all above- and below-ground physical properties of the planet,” he says. “That way you could plan for anything.” 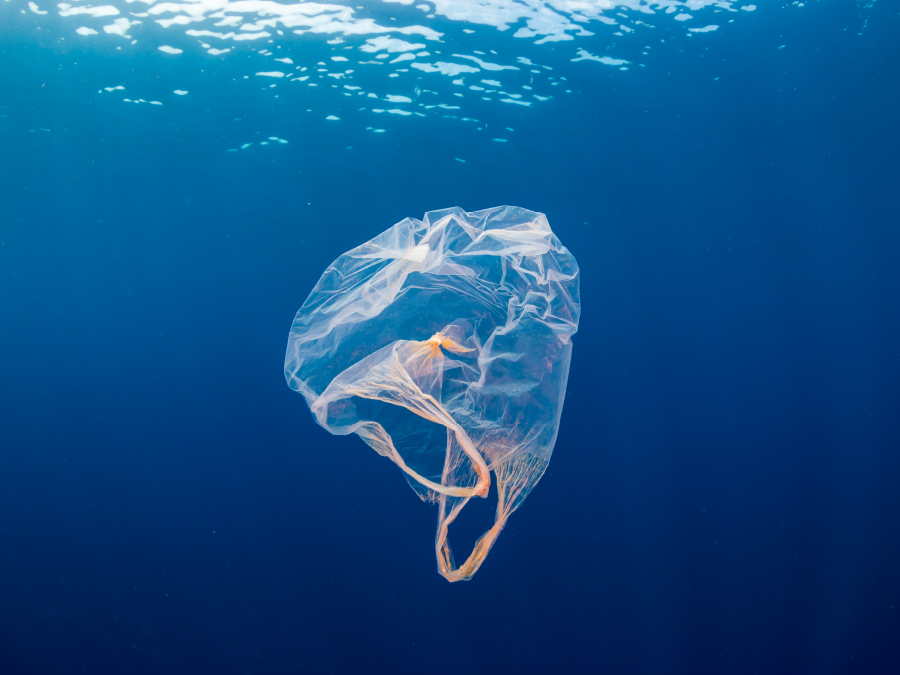 Tracking plastic in the ocean

The amount of plastic in our ocean is growing exponentially. Recent estimates suggest more than 5m tonnes of plastic reach the ocean each year.

TOPIOS (Tracking Of Plastic In Our Seas) is a project by Utrecht University professor Erik van Sebille, funded by the European Research Council. It aims to build a model that tracks plastic movement through the ocean.

Simulated plastic particles are tracked by state-of-the-art hydrodynamic ocean models to build maps of pathways through oceans and coastlines. The numerical modelling will be used to predict where the risk to marine life is greatest.

go to article Is blockchain a game changer for the built environment?

go to article Can high-energy data centres ever be carbon neutral?