Hambantota in Sri Lanka serves as a cautionary tale of how not to develop an emerging world port. Most of the $1.3bn it cost to build came from Chinese state banks, part of roughly $8bn in development loans that flowed into the country from Beijing following the end of a long and brutal civil war, in 2009.

A Chinese firm – China Harbour Engineering Company, one of the country's largest – did the work, which was completed in 2010 and formed part of a wider development plan for the sleepy town on Sri Lanka's south coast, roughly 200km from the capital, Colombo. It was set to include a large industrial zone, an LNG plant, a cement plant, an international airport, a world-class cricket stadium and a tourism centre.

In theory, the port – more than an hour closer by sea than Colombo to the busy shipping lanes that cross the Indian Ocean, connecting Asia to Europe via the Suez Canal – was well placed to take a chunk of the business from the 60,000 or so commercial vessels plying the route. In practice, it was ill prepared to do so. There was no deep-sea port, and firms in Colombo balked at the high costs of relocating, the dearth of domestic cargo and the poor connectivity with the rest of the country. Aside from ro-ro ships – which transport cars and other vehicles that can "roll on-roll off" – which the government forced to divert to the new port from Colombo, the big shipping firms and associated businesses stayed put.

Hambantota's industrial development had been almost completely neglected, meanwhile. "It's not an industrial town. There was a proposal to provide more land to develop processing industries, but the opening of the port was rushed and few facilities were in place. [The government] had no economic plan to recover the money they had spent," says Asela Gunatilake, an investment analyst at JB Securities, a stockbroker in Colombo.

In addition, the project was mired in allegations of corruption, with the New York Times reporting that a government investigation had uncovered large payments from the Chinese port construction fund to aides to then-president, Mahinda Rajapaksa, during the election campaign of 2015. Hambantota was the home province of Rajapaksa, who had engineered the bilateral agreements with China in a tilt away from the country's historical reliance on India following the war, and many saw the port development as his personal vanity project.

By 2017, the port was handling roughly one ship a day, a rate that failed even to make the UN's 40 largest ports list. Fed up with heavy losses operating the port, in the face of swingeing interest rates on the original loans, and in the face of stiff local protests over selling off a key national asset to the mightiest regional power, the new government sold the port to China on a 99-year lease.

The terms were a long way short of favourable, reckons Gunatilake. "We were in this debt trap and desperate for foreign currency," he says – $5.9bn of foreign loans are due for repayment this year, while Sri Lanka's GDP is $87bn. "The government had very little bargaining power."

"We were in this debt trap. The government had very little bargaining power" Asela Gunatilake, JB Securities

As China continues to invest in the world's ports, cases like Hambantota have focused attention on the best way these vital pieces of infrastructure can bring prosperity to the countries in which they are based. In particular, they raise questions of how best to balance the need for private investment – without which development plans will flounder – with the need for national control.

Chinese firms now have stakes in nearly two-thirds of the world's 50 largest container ports, reports RWR Advisory Group, a Washington-based consultant. The spending is a pillar of its Maritime Silk Road strategy, aiming to link ports in Asia, Africa and Europe that are either funded by Chinese investment, managed by Chinese firms, or both. The sector has taken a decent chunk of the $1.12tr that the country has ploughed into 87 countries across the world since 2013 as part of its Belt and Road Initiative. Shipping is the fourth largest investment sector of the plan, consuming more than $75bn.

But those seeking such finance should be aware that their interests and those of their deep-pocketed investors may not be in alignment.

"China is a private party in these deals, most interested in controlling its supply chain, with little concern for the social and economic side of their investments [for the host]. If they are involved, they want to have [a country's] natural resources and its ports, and to extract the first via the second," says Arenso Bakker MRICS, a port expert from the Netherlands who has worked with the Panama Canal Authority to expand the Panama Canal.

Ports matter in Asia, not least because their neglect is proving a big sticking point in the region's economic expansion. A 2017 World Bank report noted that, despite South Asia recording the second-highest economic growth in the world, it was still a relatively small player in world trade. Thanks to the high costs and slow process of getting a shipping container in and out of South Asia, the market commands less than 3% of global container port traffic. If the region's ports were as efficient as the world's best, this number would double, the report noted.

Improving efficiency means involving private firms to create a market for services and drive demand, says Bakker. But this requires a delicate balancing act: keep too tight a grip on the ownership and management of a port and private companies will lack the flexibility to shape the services they need to satisfy their customers. Hand away too much control and – as with Hambantota – you give away a key plank of your economic strategy and surrender a key strategic asset. 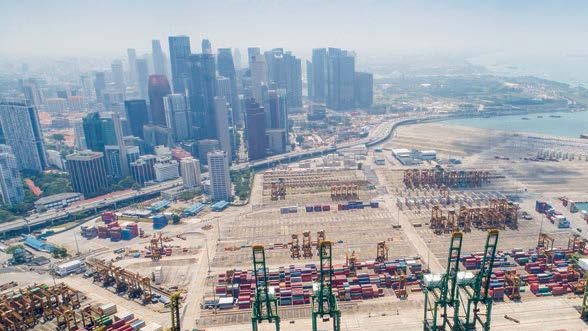 A long-term government vision has enabled Singapore's port to prosper despite the surrounding city curtailing its growth. Image by Getty

Reserving the power to shape a port's development is essential, says Darwin Marcelo, senior infrastructure economist at the World Bank in Singapore, who until recently worked on a trust fund providing finance to developing world ports.

He points to the success of Singapore and Rotterdam, both ports that have prospered despite limitations on their space imposed by the large cities that contain them. The level of forward planning required to provide this type of integrated growth requires "strong government institutions that are technically capable and have low corruption levels" – features which are rare in most emerging countries, he notes. Without the discipline these impose, he says, it is difficult to create the sort of stable incentives – reliable infrastructure, tax incentives and so on – required to attract the private sector.

The spillover benefits from port-mediated trade mean that new ports are often located adjacent to, or within, cities; in such cases both the economic opportunities and the hazards are greater. In the first case, co-location can be essential to a port's long-term economic impact. Access to the industrial capacity that is typically available in a city is a pre-requisite for this. It will help develop a port from a place where boxes are simply shuffled for forward transit – a so-called trans-shipment port – to one where their contents can be refined or assembled before being sold locally or sent back on their way by sea, which brings larger and longer term economic benefits.

Bakker points to the example of Tanger-Med in Morocco, where savvy government infrastructure spending helped the port to evolve from the first type of port into the second. "It was initially a trans-shipment port, with the reshuffling of containers providing few jobs. Now there are several car factories about 50km away and a railway connecting the port to these, so private firms have come, bringing much greater economic benefit to the country," he says.

In the absence of this type of government planning, haphazard growth among port cities can save up future problems for even profitable ports.

Across Latin America, in locations such as Lima, San Salvador, Buenos Aires and Montevideo, unplanned development has put ports and cities in competition for key infrastructure services – notably transport – and seen cities suffer from pollution and congestion. "As these ports have grown they have overloaded the city infrastructure until the growth of the city has become constrained by the port and vice versa," says Marcello.

With port authorities in most cases owned by national governments, these problems are exacerbated when the economic benefits of hosting a port are not enjoyed by the host city. In Mombasa, Kenya, the negative impact of the port – noise, pollution and the cost of maintaining the roads under heavy use from lorries serving the port – fell squarely on the city, says Marcello. "The benefits, however, in the form of port taxes and associated revenues, flowed to the Kenyan government."

The local labour market found itself similarly unrewarded, he says. Private companies operating the terminals and associated facilities favoured skilled labour from abroad for jobs such as operating terminal cranes and warehouse machinery. For unskilled jobs – maintaining the buildings, keeping the facility clean – the national government encouraged Kenyans from other parts of the country to settle in the city.

One group of partners that might help steady the ship when it comes to developing world ports are European operators, who are increasingly competing in the sector.

"They have expertise, not only in how to run a port but in the link between the private and public sectors that can ensure progress on societal challenges such as decarbonisation," says Isabelle Ryckbost, secretary general of the European Sea Ports Organisation.

The Port of Rotterdam International has owned 50% of Oman's Sohar Port and Freezone since 2002, in which time capacity has grown from 4m to over 60m tonnes of pass-through cargo a year. Today, 50% of Oman's trade goes via the port, it has attracted accumulated investment of $23bn and employs 25,000 people.

The Omani government has provided the public investment for basic infrastructure such as breakwaters and roads, while the Sohar Port and Freezone has served up customer-related infrastructure such as jetties. Commercial introductions have helped the port develop. Rene van der Plas, director of Port of Rotterdam International, reckons 10 private firms and entities from Rotterdam now provide port-related services in Sohar, including break-bulk and ro-ro stevedoring, dry-bulk terminal operations and container handling.

As importantly, Port of Rotterdam has provided skills that are being transferred to its government partner. "Initially we held most of the management positions; now most are held by Omani government employees," says van der Plas.

With Chinese firms active users of Rotterdam's port, and Chinese investment funding its expansion, van der Plas is keen to defend the country's record. "I don't think other countries should be scared of Chinese investment or the involvement of their private companies," he says, stressing that one declared objective of the Belt and Road initiative is to develop local economies.

However, he concedes that the Hambantota example does little for China's reputation as a steward in this type of development model. "A lot of infrastructure has been created without ever providing a benefit for the Sri Lankan economy." This, he believes, runs contrary to ports' fundamental purpose: "The only reason to start port development is socio-economic value. Of course you need commercial value, too, but if it doesn't create jobs, education and local growth in balance with the local environment and community, there is just no point."

go to article Is commercial real estate at the start of a downturn?