One brick at a time

Brick has been used as a building material across the UK since Roman times. This, the first of three articles on the subject, looks at its long history

Britain first acquired the skills to manufacture fired clay bricks when large parts of the country became part of the Roman Empire in the first century AD.

The bricks made by the Romans were generally wider and thinner than those today and were used in various ways, including as lacing courses in walls of rubble stonemasonry and in the construction of supporting pillars for hypocaust heating systems. Roman bricks can be found throughout the UK at significant sites such as Burgh Castle in Norfolk, and as far north as Newstead at Melrose in Scotland.

When the Romans left Britain in the fifth century, so too did brickmaking, until the 12th century. Some buildings from the period in between were built with re-used Roman bricks, for example the nave of St Alban’s Abbey. Construction on this began in the 11th century, reusing materials from the Roman British town Verulamium.

The earliest known use of brick manufactured in the UK after the Romans left is widely regarded as being Coggeshall Abbey in Essex, the oldest parts of the monastic buildings dating to 1190.

Beverley North Bar in East Yorkshire is a very good surviving example of medieval English brickwork, construction of which began around 1409. The bricks used were thin at 50mm and, as with indigenous bricks of the time, somewhat uneven in shape and size. This gave the brickwork a distinctive character, with wider mortar joints and uneven bonding.

'Significant surviving examples of brick buildings from the medieval period include Rye House Gatehouse, built around 1443, and Thornton Abbey, Lincolnshire, built around 1382'

Significant surviving examples of brick buildings from the medieval period include Rye House Gatehouse, built around 1443, and Thornton Abbey, Lincolnshire, built around 1382.

A decorative feature evident in medieval brickwork that extended into the 17th century was the use of diaper patterns. This saw saltires and diagonal intersecting lines picked out using well-vitrified or flared headers that were overburnt during firing and presented a grey to blue colour.

Both cut and moulded bricks were used in this period to add decorative embellishment. Brick was built with considerable skill and good understanding of the properties of the material, and was used to create vaulting, circular and angled walls as well as arches.

In this period, there was a status attached to the use of brick: it was largely confined to those at the upper echelons of society, in both church and state.

Following the early brickwork of the medieval period, a greater use of the material occurred in the 16th century, including such buildings as Layer Marney Tower, built in 1523, and Hampton Court Palace (see photos).

Brickwork at this time began to exhibit greater standardisation in terms of technical application, including greater use of bonds. These were most commonly English or English cross, although irregular bonding was still being used. 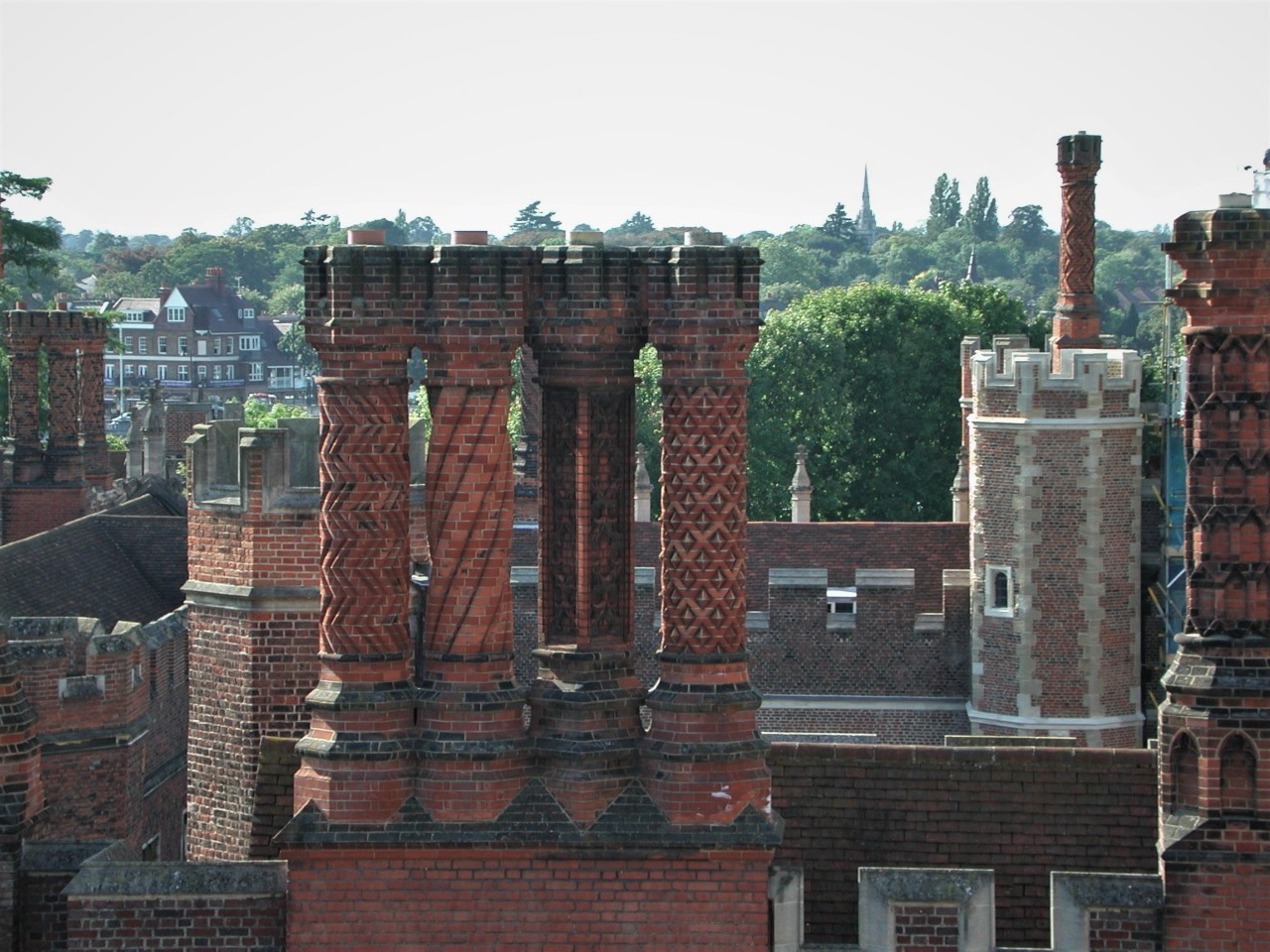 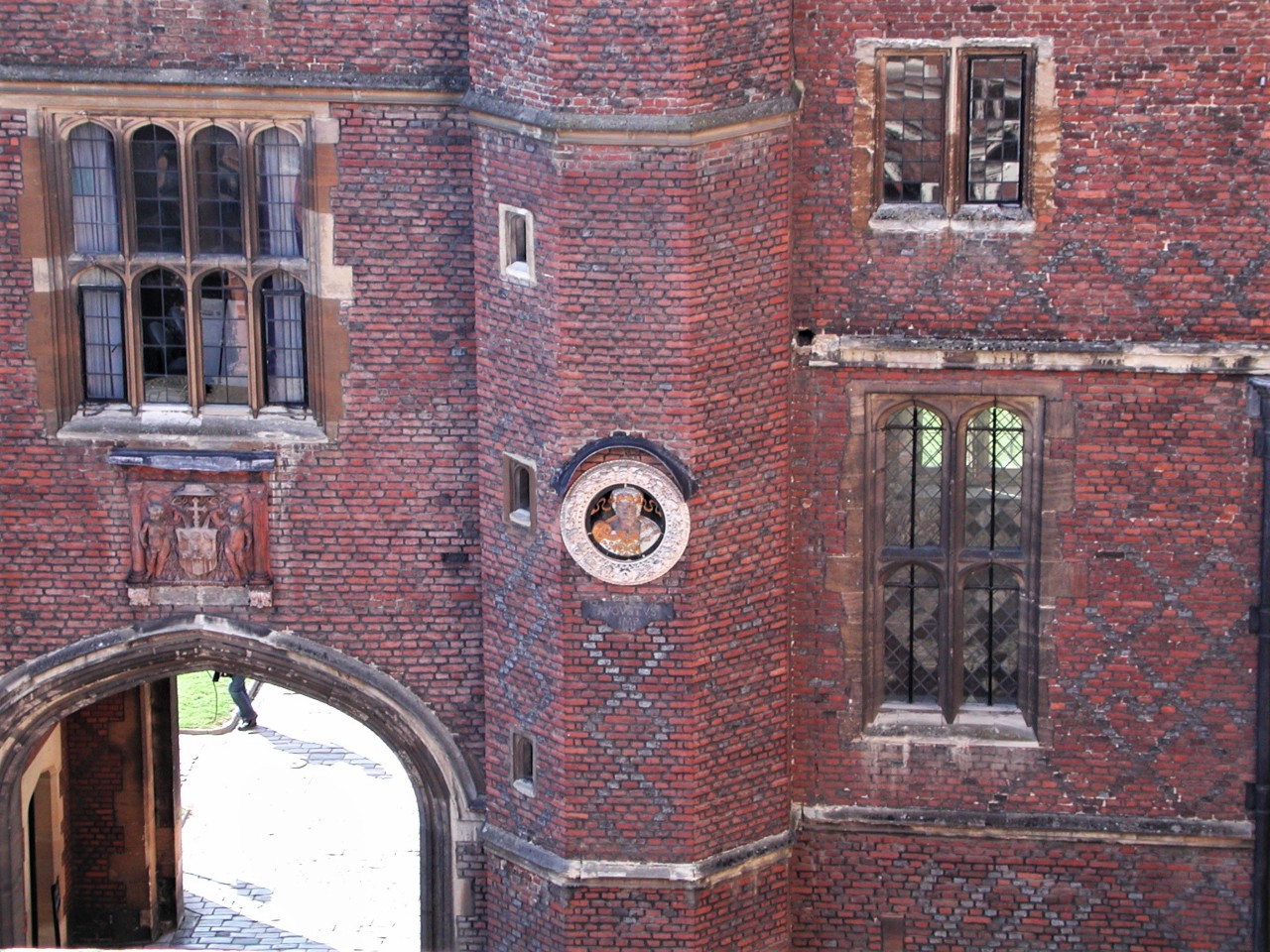 The high status of the brick buildings being built is reflected in the use of decorative features such as diaper work and techniques such as colour washing and the pencilling of joints. Bricks of this period continued to be somewhat irregular in size and shape. Some brickwork was of exceptional standard, for example at Leez Priory, Essex, built 1563, and the moulded brickwork at Roos Hall, Suffolk, built 1583.

The use of brick grew further in the 17th century, with buildings such as Balls Park, Hertford, 1640, indicative of the time. The use of Flemish bond gained popularity, and gauged brickwork emerged as an option for enrichment – a highly significant development in this period.

Gauged brickwork involves cutting and rubbing softer bricks to allow very thin, precise joints to be used. An early example of such gauged brick enrichment is the Old Meeting House, Norwich, built in 1693.

A considerable amount of brick was used to rebuild London following the Great Fire in 1666. The great gathering of craftspeople occasioned by this rebuilding had a long-term impact on brickwork in the UK.

Previously a material most commonly used for the houses of the powerful and wealthy, by the end of the 17th century brick was becoming much more commonly used for buildings of different classes. Its geographical spread also expanded at this time, as brick buildings become more common throughout England and Wales.

The use of fired clay bricks in the UK became considerably more popular going into the 18th century. Brick was used to create many architecturally impressive buildings such as Chicheley Hall, Buckinghamshire, in 1719 and Bailey Hall, Hertford, around 1700.

Brick was also used for terraced housing in a way that was previously unseen; an example is Union Place, Wisbech, built around 1800. These buildings often incorporated gauged-brick enrichment, as both the quality of bricks and the skills of craftspeople improved.

Importantly, brick was also used during this time to build housing for both rural and urban workers as well as the privileged. This meant it was used across a greater geographical area, with considerable expansion in Scotland in the 18th century, for example.

In some cases rural housing reflected influences from vernacular construction techniques, as at Flatfield Farmhouse, Perthshire, built in 1785 (see photo). 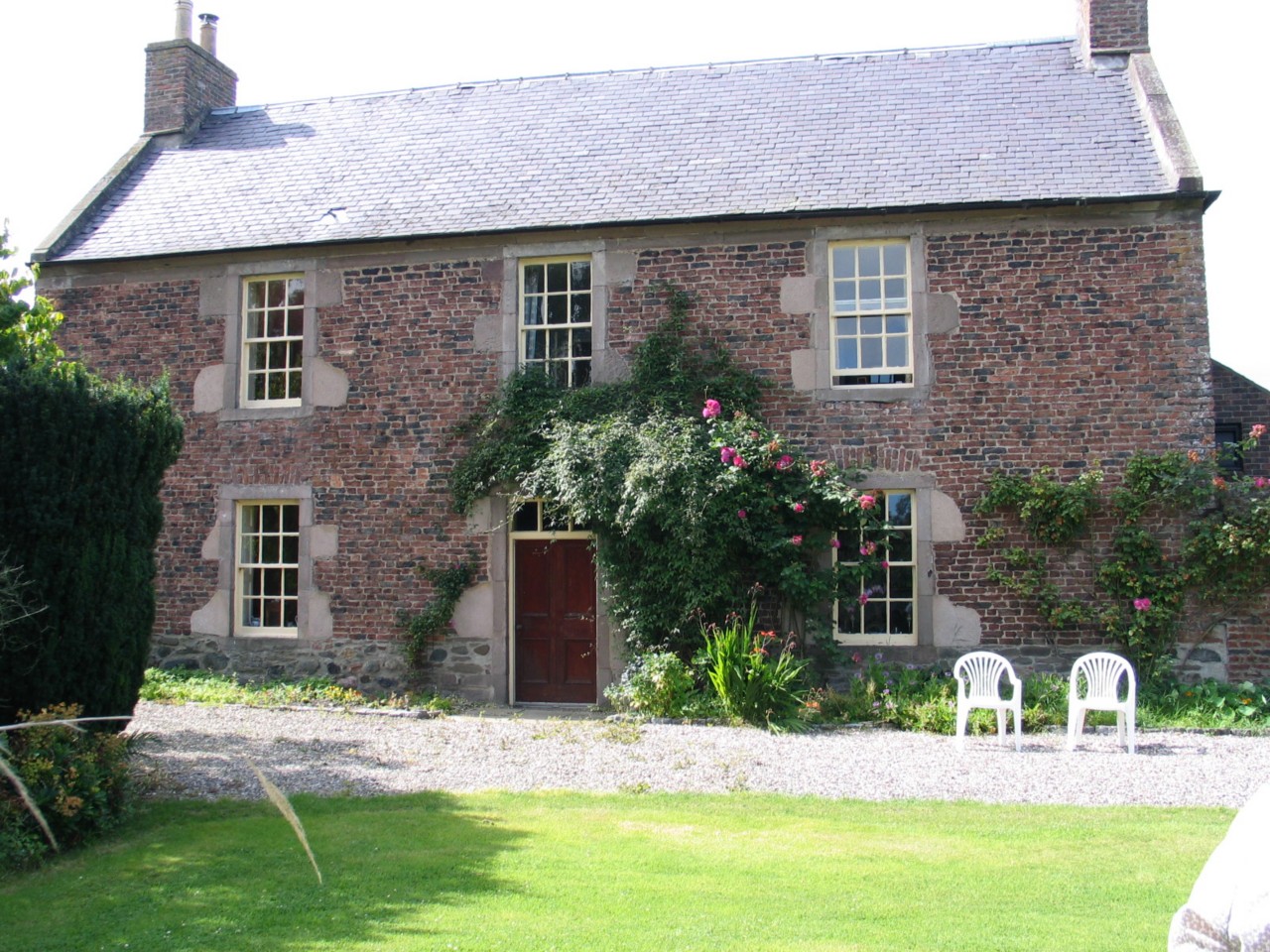 The Georgian period saw brick used for housing in both urban and rural areas of the UK. Flatfield Farmhouse, Perthshire, shows many influences from vernacular building traditions © Historic England/David Pickles

Many early textile mills were constructed partly or wholly of brick, including the use of arched flooring to build fireproof mills, as at Ditherington in Shropshire in 1797. This strategy quickly became popular throughout Britain. Overall, the Georgian period was one of considerable expansion in the use of brick.

From a technical perspective, Flemish bond was commonly used in this period, although in rural buildings irregular bond was common. It was at this time that gauged brickwork became more widely practised throughout British brick buildings.

Brick was often used in the 18th century for specific purposes in stone structures as well as to construct buildings in their own right. Such uses include vaulting, lining ashlar walls and the construction of internal partitions.

Higher-quality bricks used on the front facade of a building would sometimes be snapped in half, resulting in poor binding with the brick wall behind and giving the illusion of an alternative bonding style.

In the early part of the 19th century, the use of brick continued in much the same way it had during the previous 100 years. The growth of railways and their use in the mid-19th century, however, meant a considerable expansion in the use of brick due to the need to construct bridges, line tunnels and ancillary structures.

Other engineered constructions of brick at this time included tall chimneys, lighthouses and an incredible range of industrial structures. This use of brick in an engineered context has left a considerable legacy, from North Unst Lighthouse, Shetland, to St Pancras Station, London. Brick was also used throughout Britain at this time to construct vast rows of housing for industrial workers.

The mid-19th century saw considerable change in the way brickmaking was undertaken. The introduction of many new processes for the forming of bricks and advances in kiln technology made it more readily available and also allowed mass production of special shapes, different colours and high-quality glazed and facing bricks.

'A golden age of decorative brickwork took place between 1860 and 1890, with decorative elements incorporated into even the most utilitarian of buildings' 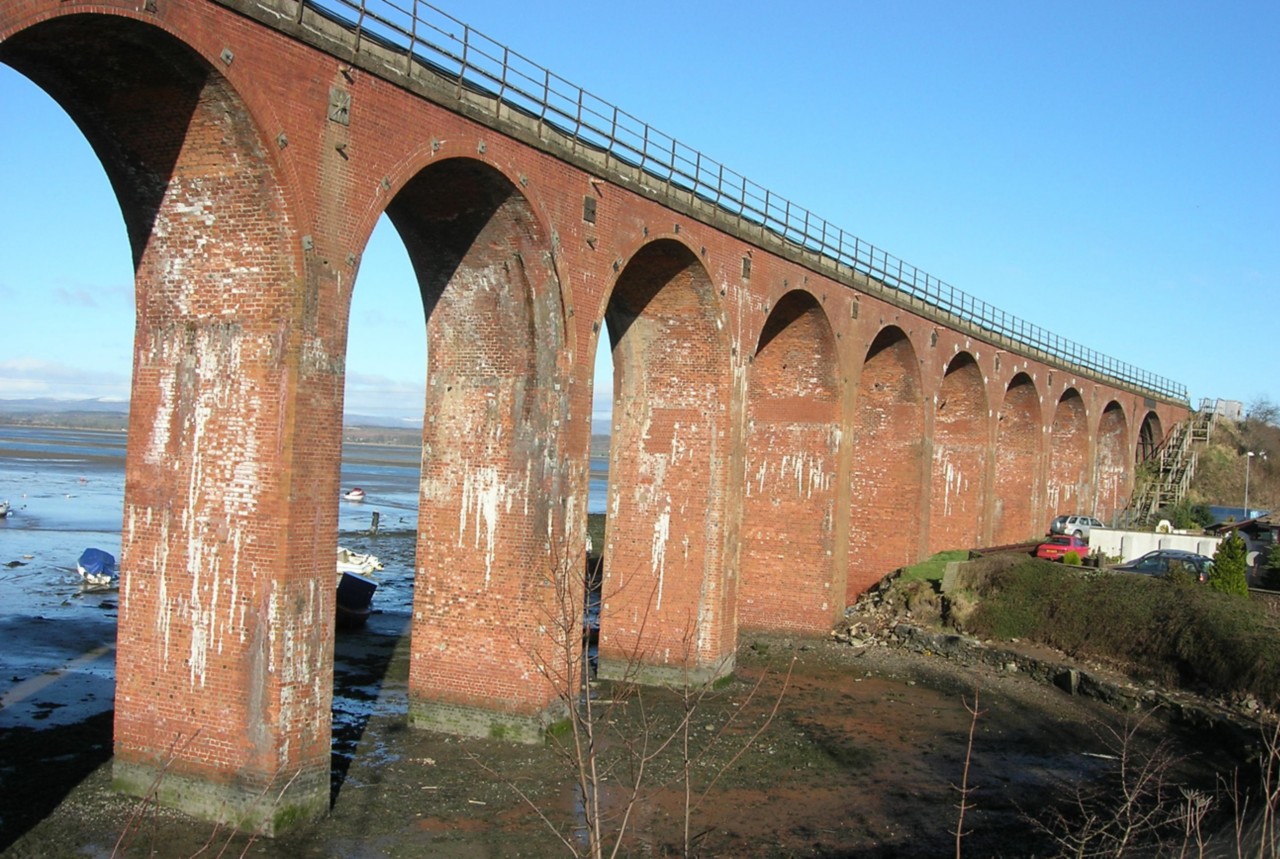 Railway construction led to a high demand for bricks to construct infrastructure, as well as allowing brick manufacturers to transport the material far and wide © Historic England/David Pickles 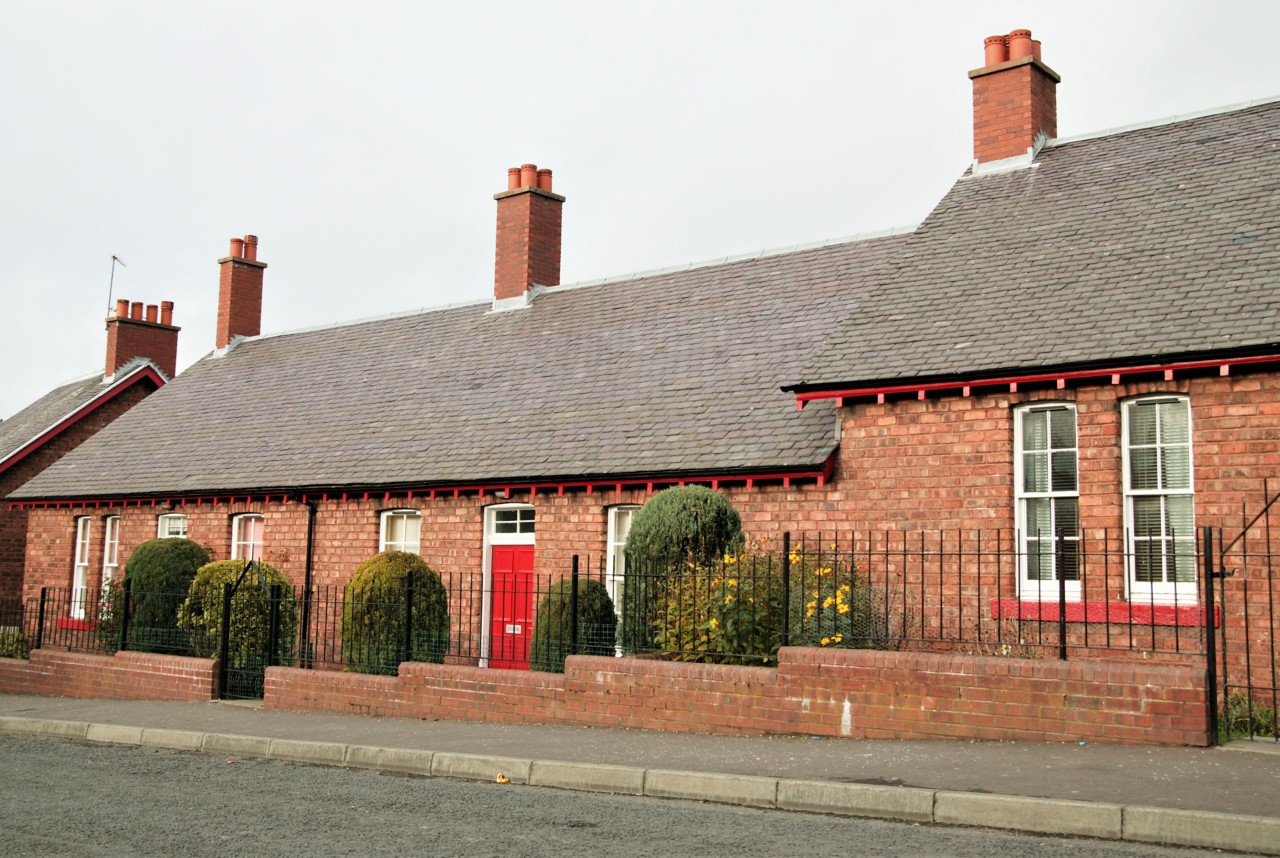 This led to a golden age of decorative brickwork between 1860 and 1890, which saw elements incorporated into even the most utilitarian of buildings. This reached its apogee with the construction of Templeton’s Carpet Factory, Glasgow, in 1892.

There are numerous technical features of note from this period, including recognisable bond patterns that can be seen throughout British brickwork. The gauge to which brickwork was laid and the size of bricks both increased in the latter part of the 19th century; both bond and gauge varied considerably by region.

Cavity-wall brickwork – which performs differently in structural terms to solid-mass brick walls – also came into use in the 19th century. However, this is not always evidenced by the use of stretcher bond. Where headers are used to tie across the cavity, bonds such as the rat-trap bond may be seen, as in the brick housing in Main Street, Newtongrange, dating to 1872.

Through the centuries these developments have left us with a heritage of brick buildings that it is important to conserve and repair correctly. It is this conservation and repair that will form the basis of subsequent articles in this series.

go to article Why take a building conservation accreditation?

go to article Construction materials: the current state of play

go to article Restoring peatland on the UK defence estate