In the first part of a new series on buildings that elevated cities, Modus turns its attention to the magnificent architecture of Bilbao’s Guggenheim. The building was the catalyst for the regeneration of a rundown industrial area, turning the waterfront site into a must-visit location and having a big impact on the wider city.

Designed and created almost 25 years ago, the 32,500m2 museum in northern Spain raised Bilbao to a new position. It went from “a small traditional village with traditional people and traditional buildings to a new city with a building now attracting 1.2m visitors a year,” says Juanjo Lopez del Corral Regulez, managing director at CBRE, Bilbao. With its interconnecting stone, glass, and titanium design, “it is an iconic building integrated into the city,” he says.

In 1991, the Bilbao Guggenheim Museum began as a strategic project for the Basque Country and the city of Bilbao. Local and regional public institutions agreed to an ambitious plan to change the city from an industrial economy to a new kind of economy with different services, which would attract more tourism.

Two years later in 1993, an international competition was won by architect Cesar Pelli, creator of Petronas Towers in Kuala Lumpur and the World Financial Center in New York, to develop a new city hub close to the Nervión River. It featured offices, residential units, a shopping centre, hotel, and library, which made up 30% of the area and an expanse of new public green space for pedestrians making the other 70%. Work on the museum, just 800m from the city centre, began in 1994 and finished in 1997.

The result couldn’t be more positive, says Leyre Octavio de Toledo Rodríguez, executive director of architecture at Savills Aguirre Newman. “[The museum] started the transformation of Bilbao. Its design, architecture and international impact confirmed its success – located at the riverside it started the new urban planning of the city, making Bilbao what it is today,” she says.

Images of the Guggenheim during and just after construction, showing off the methods and materials used to create the museum's complex and fluid shape.

"Its construction was the cornerstone of changing the city, enhancing its new image. Before Guggenheim, the city was immersed in almost post-industrial decadence. The new museum was social change,” adds Rodríguez.

Peppered with four and five-star hotels, high-end residential property, restaurants and an abundance of green space, today the area around the Guggenheim is one of the city’s most valuable landscapes.

But it is the Guggenheim’s design, with no front or back, and curves of titanium, that takes centre stage. Its architect, Frank Gehry, is the man behind the Walt Disney Concert Hall, Los Angeles, the Richard B. Fisher Center, New York and the Museum of Pop Culture (formerly the Experience Music Project) in Seattle. His style is said to defy categorisation.

“The surprising thing about Gehry’s buildings are how extremely contextual they are,” says Ann Gray FRICS, Gray Real Estate Advisors and RICS Senior Vice President. “There is no question he has incorporated compound radii from the old to the new in a way that unifies the disjoined street frontage in this randomly built part of the city. 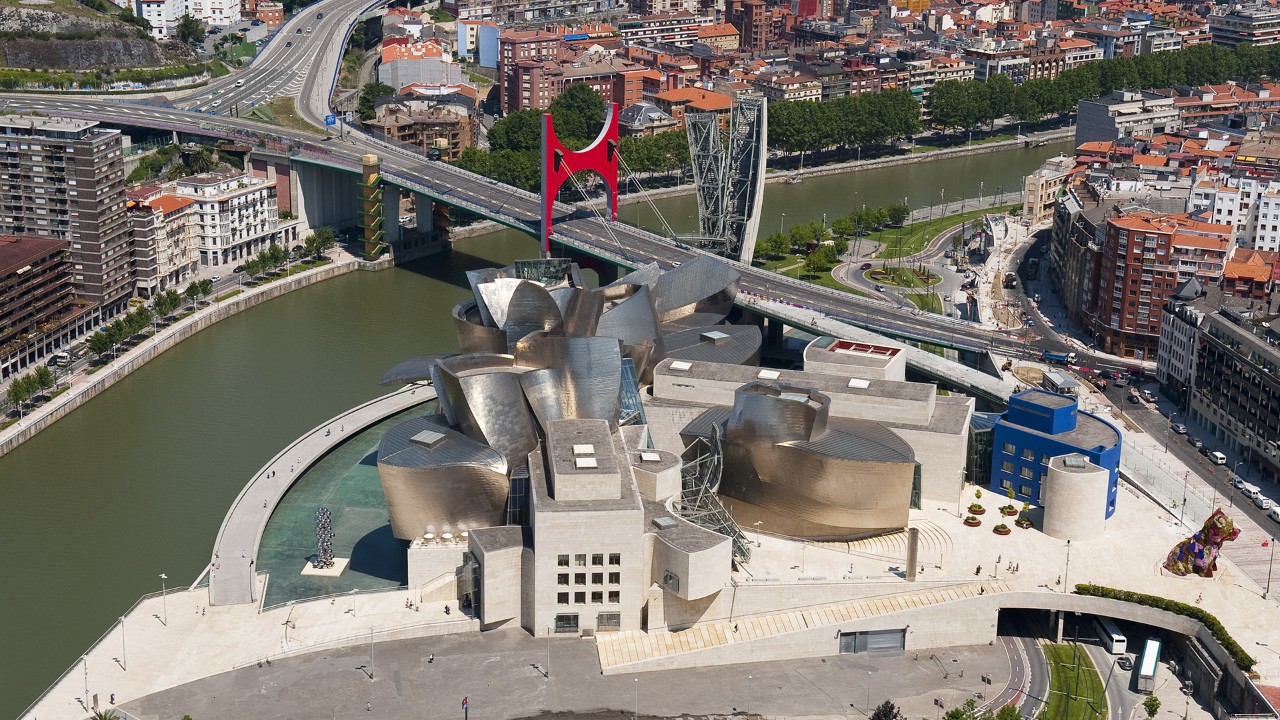 “[While the Guggenheim] was not the first building that he designed in this aesthetic, it was the first to be completed, eliciting rave reviews from critics and creating a global appetite for the groundbreaking work that more conservative clients were slow to embrace. It is part of a string of city-sponsored riverfront amenities that incorporate the curve of the riverbank into their site planning.”

Gehry, says Gray, “created a three-dimensional metaphor for the water that is the city’s life-giving force. [His] claim that his design references the vernacular rhythm of nearby housing is a stretch but there is no question that he took it into account.

“The scale and level of detail abutting the neighbourhood is deferential, rising to an exuberant architectural flourish toward the waterfront,” she adds.

Such is the power of its presence that the Guggenheim, like the Sydney Opera House, has become the city’s brand. “Combined with the prestige of the Guggenheim as an institution and the quality of its collection, this architecture has become a destination and a valuable boon to the local tourist economy, gaining the moniker ‘The Bilbao Effect’,” says Gray. “It put Bilbao on the international cultural map.” 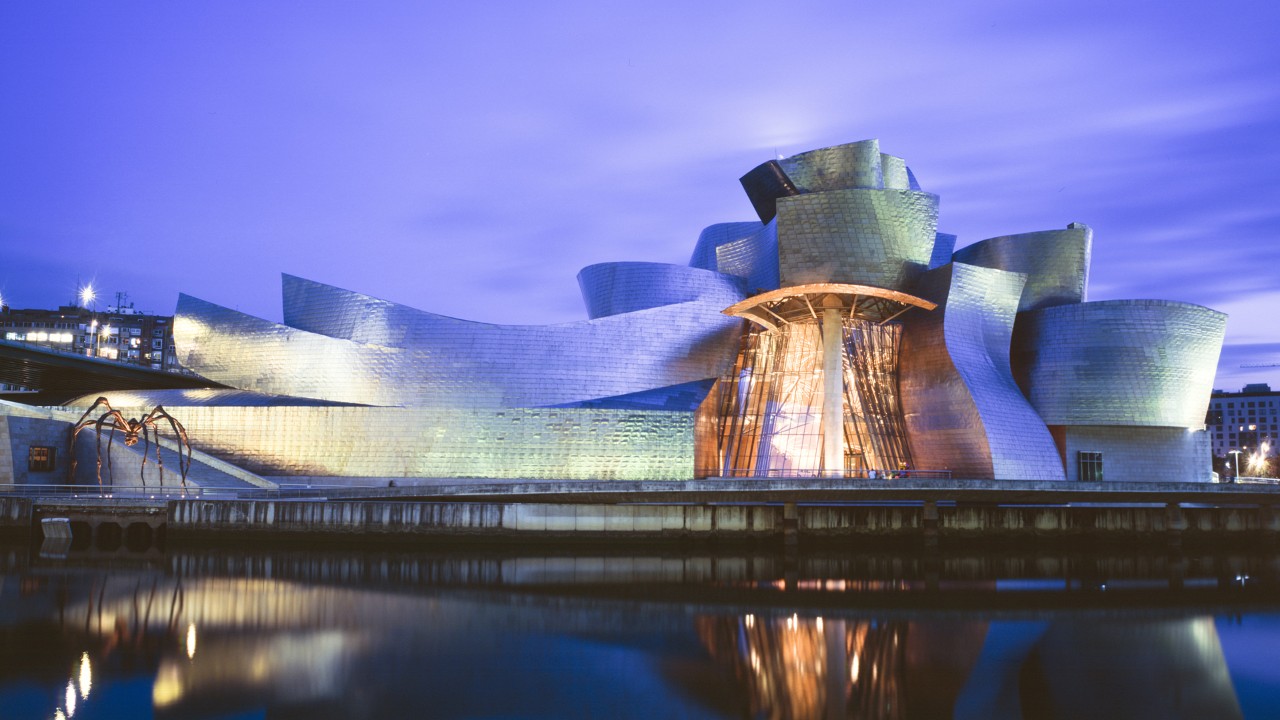 While there is no questioning the building’s popularity as an attraction, it’s sustainability credentials in today’s ESG-driven, environmentally friendly world, are another thing.

“The principal sustainability item is the urban regeneration that the building provides,” says Rodríguez, adding the durability of the titanium in the façade ‘is something to point out.’ But she adds: “Most likely, it was not designed with sustainability in mind as it was built in the era of architectural excess and disproportionate budgets.”

Gray is more candid: “If you consider the thousands of tonnes of steel and concrete required to make the sheet metal skin look like it is floating, you could never say Gehry’s buildings are environmentally driven.”

That the Guggenheim Museum was created to make a statement for change is a testament to how a building can revitalise, regenerate and rejuvenate a city not only for the better, but forever.

Don’t miss a single Modus article – signing up for the newsletter. 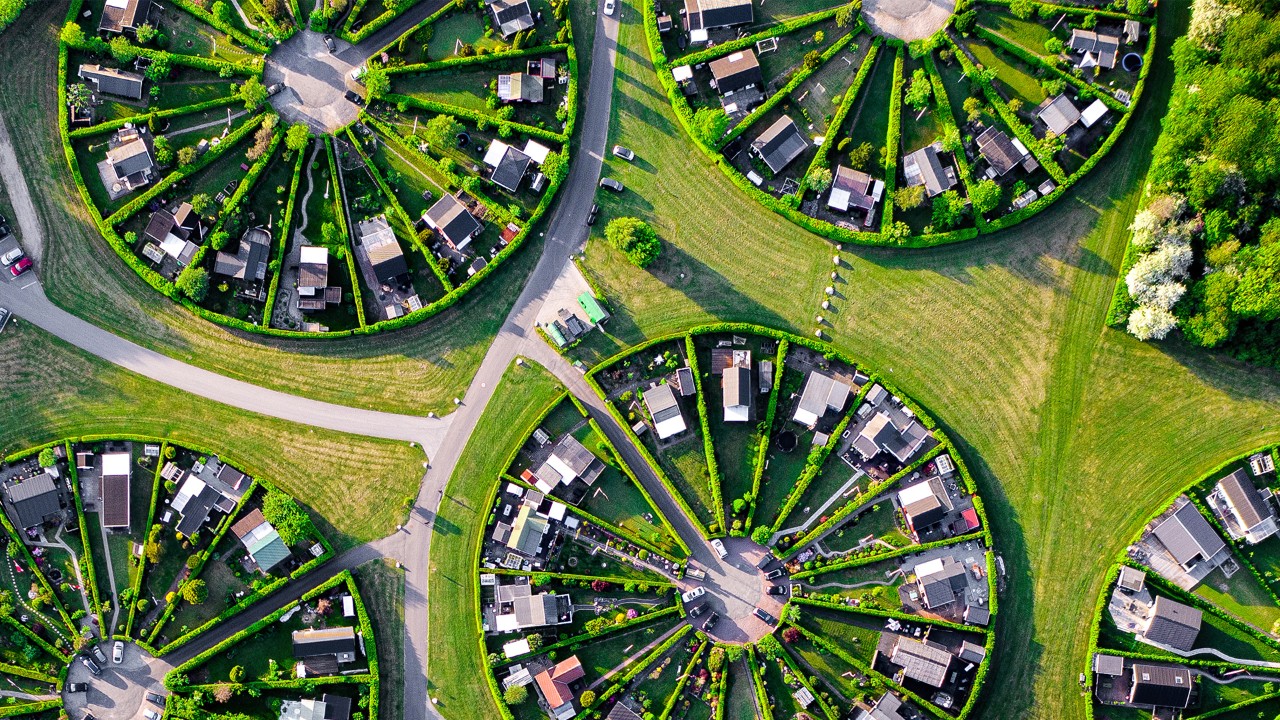